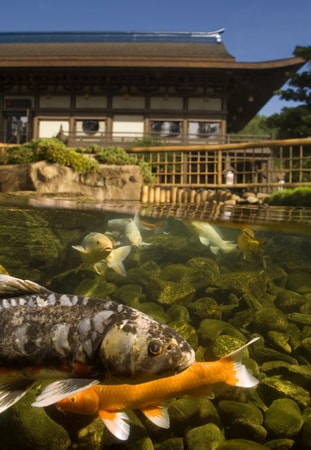 I’ve wanted to get this shot at the koi pond at Epcot’s Japan Pavilion for years, and finally became convinced I had half a chance of pulling it off. I used our underwater camera housing, which normally sees action in swimming pools, water parks and at Castaway Cay, to hold the camera halfway under water so the waterline bisected the photo. Because the koi pond is fully in shadow early in the morning, I rigged the camera to fire a couple of big studio flash units to put a little electronic sunshine on my fishy friends.

I’d been afraid my presence in the water would spook the fish, but by utilizing stealth, patience and consummate skill (but mostly with Todd Harmon from Living Seas Animal Care giving them their breakfast) they warmed up to me.

This photo was actually a lot of fun to figure out and execute…for the most part. (Note to self: Next time take your cell phone off BEFORE getting in the water in leaky waders.)