A Long Time Ago, in a Galaxy Far, Far Away… 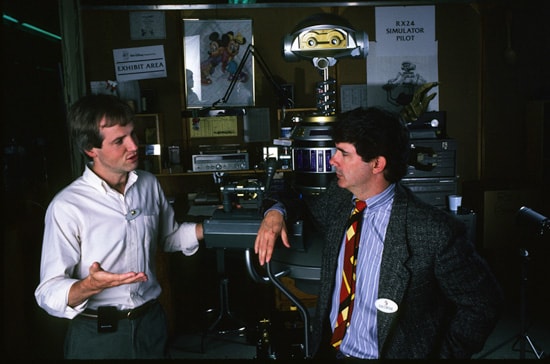 Twenty five years ago, fellow Imagineer Tony Baxter and I flew to London, to experience a new ride system and determine whether it might have application for attractions in our Parks. The system was a flight motion simulator used to train professional pilots to fly jet aircraft, and as soon as we took our first thrilling ride, we were convinced it had tremendous potential.

Shortly thereafter, back at Imagineering in California, George Lucas spent the day with us, brainstorming ideas for potential projects we could work on together. When he happened to see a storyboard in the hallways for a show based on the simulator technology, he instantly saw a perfect fit for a Star Wars attraction.

The rest, as they say, is history. Star Tours as it soon became named, has carried guests into the world of Star Wars in Disney Parks around the world. I was fortunate to be part of the original Star Tours team, as the show’s writer/producer. Later this month at “Destination D” I’ll be taking Star Tours fans behind the scenes of the creation of the original show “a long time ago!”

But today’s post is really more about “a short time ahead,” as we announce our blog series on the re-Imagineered Star Tours attraction that opens next summer at Disneyland Park in California and Disney’s Hollywood Studios in Florida!

This time around, I’m the creative lead, and over the upcoming months, will be sharing stories about the new show’s creation, production and installation, You’ll meet some of the characters in front of – and behind – the cameras, and learn just what we mean when we say “The Adventures Continue!”