Disney Parks Teams Up With the Orlando Magic and Amway Center

Like most everyone who lives in Orlando, I’m eagerly counting down the days until the opening of the new Amway Center, which will be home to the Orlando Magic and host to world-class entertainment and sporting events. The Amway Center will usher in a new era for Central Florida and I’m happy to share that Disney Parks will play a supporting role. 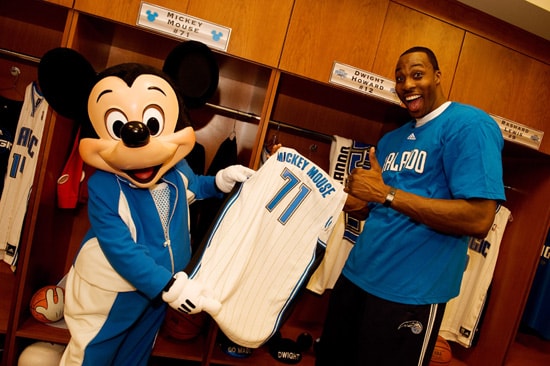 This morning, with blue and silver pixie dust in hand, Mickey Mouse presented Orlando Magic superstar Dwight Howard with a “mouse warming” gift in celebration of the team’s new home and a multi-year agreement making Disney Parks a “Champions of the Community” sponsor for the franchise and Amway Center. The Orlando Magic in return gave Mickey Mouse his own jersey emblazoned with the #71, a nod to the year when Walt Disney World Resort opened. Click here to see a video of the gift exchange.

Through the new agreement, Walt Disney World Resort and the Orlando Magic will seek ways to team up for the benefit of the Central Florida community. Considering that both share a focus on improving the lives of children, these efforts have tremendous potential to make an even greater difference for the common good.