When I think of classic Disney icons, one image immediately comes to mind – the Ear Hat. It has become that “must have” souvenir when visiting Disney Parks (I got one when visiting Tokyo Disney Resort a few years ago). You may recall from previous Disney Parks Blog articles that we’ve started introducing limited edition ear hats (for a refresher – see Alice in Wonderland and The 55th Anniversary of Disneyland Resort. These highly collectible hats are presented in a satin lined hat box and contain unique applications and designs. In a word, they look awesome (okay, that was three words). Now, the limited edition ear hat is coming to Vinylmation on September 24, 2010 at D-Street in California and Florida. These hats have an edition size of 600 each and contain a unique addition – a specially designed 3-inch figure. I recently spoke with Maria Clapsis, the artist who brought these ear hats to life.

“These are the first limited edition ear hats I have designed,” explained Maria. “I used two different 9-inch figures from the Urban #4 series as the basis for design. I’ve designed pins and other Vinylmation figures before. Yet, it’s fun to do something completely different once in a while.” 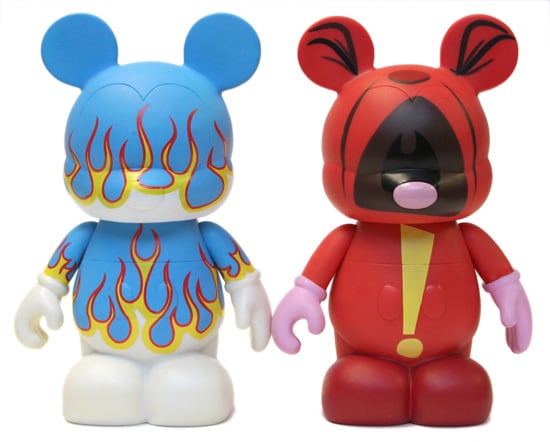 The two figures she used were designed by Thomas Scott (pictured left) and Mike Sullivan (pictured right). I asked Mike about the inspiration behind his design.

“It was how I was feeling that day [laughs],” said Mike. “At the time, I had been drawing lots of ‘cute’ things, so I went a completely opposite direction with this figure.”

It looks like I found a hat to wear when it is one of “those” days.

Thomas explained that his design was based on the hot rod culture (a culture in which I wish I could join. Hint – I need a new car).

“The figure is inspired by classic hot rod paint jobs,” continued Thomas. “The most common color scheme is black with red and yellow flames. The other popular one uses the blue as a base color to which I selected. I do not have a hot rod, yet I really like the culture and art design of hot rod customizers.” 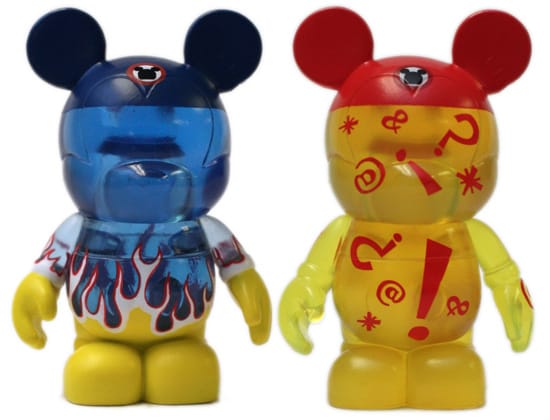 Maria worked with Thomas and Mike to create the 3-inch figures. She took elements from the 9-inch figures. If you look carefully on the bottom of the figures, you will notice that two artists are listed – Maria plus either Thomas or Mike. I love the fact that if you have all three items, they tell a complete story.

Fans in Florida can meet Maria and Thomas as well as Eric Caszatt and Casey Jones, who designed the recently released Vinylmation – The Nightmare Before Christmas series, on Friday, September 24 at D-Street at Downtown Disney WestSide. This artist autograph session will be held from 8:00 a.m. to 10:00 a.m. I hope to see you there (don’t forget to sign the “I Was There” figure).