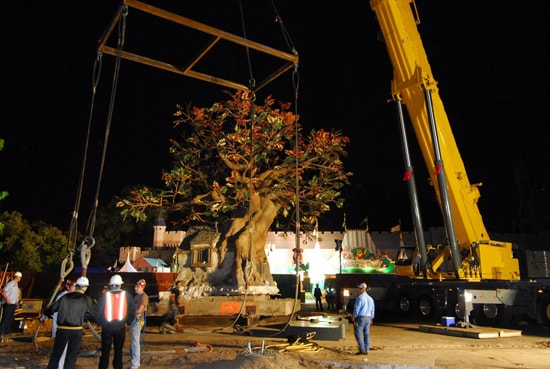 In addition to providing news and announcements, we’ve enjoyed taking you behind the scenes of some of your favorite Disney Parks attractions and experiences. Here are some of our behind-the-scenes posts.

We’ve introduced you to some of the cast members who work to bring magic to life every day at Disney Parks.

The Most Delicious Role! – Meet the one of the Disneyland Resort pastry chefs and find out why this is the most delicious role at the Resort.

Behind the Scenes: Disneyland Performers Prepare for Celebrate! A Street Party – Think you have what it takes to be in a Disney parade? You might just think again when you see how our parade performers prepare each day.

What it Takes to Serve a Family of 500 – Can you imagine cooking and serving for a family of 500? That’s the kind of orders the Disneyland Resort Resort Banquets Team fills every day.

Behind the Scenes: ‘World of Color’ Control Room – Go inside the control room from which Disney cast members run “World of Color” every night.

Behind the Scenes: Getting Down and Dirty with Pirates – How do you make a costume look dirty and smelly without it actually being dirty and smelly? Watch this video to find out.

Drawing Characters ‘Is Way of Life’ for Disney Artist – Don “Ducky” Williams is an artist with The Yellow Shoes Creative Group. Watch him draw Goofy in this video.

Every Role a Starring Role – Behind the Scenes with Window Designers – Meet the cast members who bring Disneyland Resort window displays to life.

Magic: A 24 Hour Operation – Find out what happens at Disneyland park after the gates close for the night.

Festival of the Masters Art at Downtown Disney – We uncovered the “magic” behind the “magic” in this interview with Yellow Shoes Creative Group’s Joe Kaminski.

We’ve also given you sneak peeks into new attractions as they are developed.

Behind the Scenes of the Disney Dream Mock-Up Room – This video gives you a look at the “mock-up” room at the shipyard where actual elements of the Disney Dream’s interior are assembled together for the project team to review and approve before being installed on the ship.

‘World of Color’ – Behind the H2O – Making the Fountains Dance – Prior to the opening of “World of Color,” Disney Parks Blog readers got a look at how we made the fountains “dance.”

We’ve also answered the question, “How did they do that?”

Behind The Scenes: Main Street Electrical Parade Returns To Walt Disney World Resort – How do you move a parade from California to Florida? Find out in this video!

Behind the Scenes: 120-Ton Winnie the Pooh Tree Relocated at Walt Disney World – But what about moving a 120-ton tree? How did we do that?

Behind-The-Scenes: Disney’s Osborne Family Spectacle of Dancing Lights – See how we turn millions of lights into a spectacular display at Disney’s Hollywood Studios.