I can almost hear the announcer’s voice from one of those retro-tastic television commercials from my childhood – “It’s Vinylmation – Toy Story! Now in 9-inch mega size!” I love watching those commercials today as they remind me of the countless hours I spent playing with toys. In this case, however, it’s true – we are releasing Vinylmation 9-inch figures based on characters from Disney-Pixar’s Toy Story. The three different figures will be released on September 17 at D-Street in California and Florida. In a previous article, I spoke with Thomas Scott about designing the three-inch figures. This time, I asked him about the nine-inch figures.

“We again worked closely with Pixar to identify which characters should be represented in the nine-inch form,” explained Thomas. “We always planned the overall series to be a salute to characters from all three of the Toy Story films. That is why you see Bo Peep and Zurg who were not featured in the newest film, Toy Story 3.” 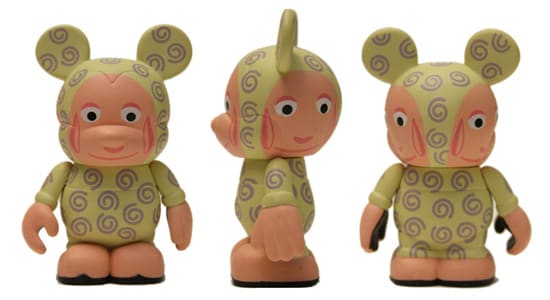 Zurg will also have an edition size of 1,200. He’s the perfect match for the 3-inch Buzz Lightyear figure (which looks great with that bubble helmet). Need proof? Look at the photo at the top (okay, so maybe I still play with toys today).

The last figure is the Little Green Men (or is that Man?). He will have an edition size of 1,500. This isn’t the first time we’ve featured the Little Green Men in Vinylmation. There was a 3-inch figure designed by Disney Design Group Artist Randy Noble in Park Series #2. This figure, however, made Thomas laugh the most.

“The Little Green Men figure makes me laugh,” chuckled Thomas. “I love the fact that the ‘Little’ Green Man isn’t so little anymore.” 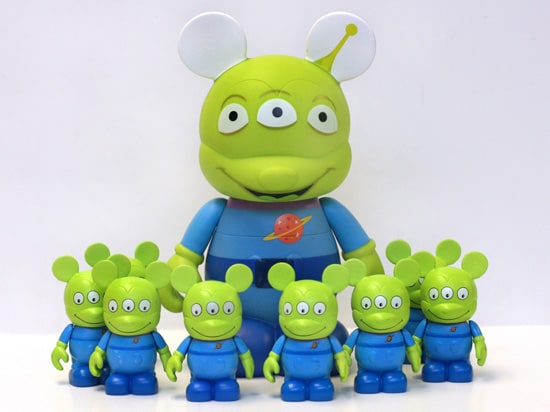 It made for a fun photo. Oh, how I wish some days that The Claw would transport me to a beach somewhere in Hawai’i. But I digress.

Thomas explained that the manufacturing and design process for a 9-inch figure versus other sizes is actually rather complicated.

“We have to design smarter when creating the larger figures,” continued Thomas. “The manufacturing process is more difficult to execute if the art isn’t done correctly. Some people may think that because [the 9-inch figure] is a larger canvas it would be easier, but unfortunately it’s quite the opposite.”

The hard work shows as these figures look great! On a related note, there will also be limited quantities of each figure released on the DisneyParks.com/Store on October 6, 2010. Oh, I think that is Mom saying dinner is ready; gotta go!