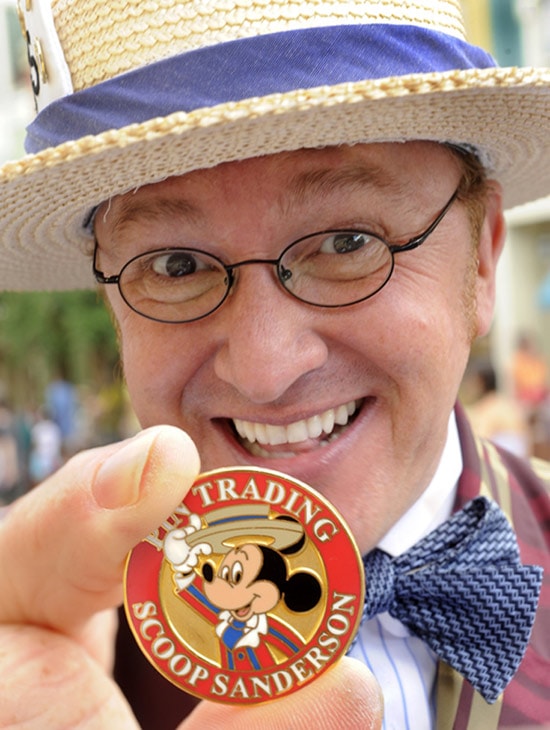 “Where’s Scoop?” It is one of the more popular questions I’ve been asked during my time as Project Manager for Disney Trading. For those who are unfamiliar, “Scoop” is Scoop Sanderson, Main Street Gazette Reporter, Town Councilman and Pin-thusiast. Fellow Disney Blogger (and awesome photographer) Gene Duncan first introduced Disney Parks Blog readers to Scoop back in May 2010. Gene also provided the great picture at the top of this article featuring Scoop holding the first Scoop Sanderson pin.

I first met Scoop on Main Street, U.S.A. when I served as a member of the 2001/2002 Walt Disney World Ambassador Team. At that time, we had a few opportunities to make some magic for Guests. But it wasn’t until I got to my current role that I realized just how much Scoop loves Disney pins. During a recent visit to Magic Kingdom, I turned the tables and interviewed him about his passion for trading.

Steven: “Why do you love trading pins?”

Scoop Sanderson: “I love the people, and I love making new pin pals. I also really love looking at pins! They are little miniature works of art. I particularly enjoy seeing pins I haven’t seen in a while. They bring back good memories, and it is great to reminisce with friends.” 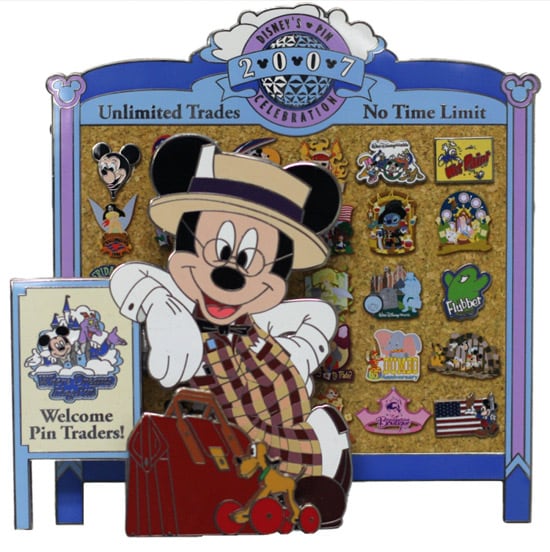 Throughout the years we’ve created pins inspired by Scoop Sanderson. The first retail pin was introduced at Disney Pin Celebration 2007. It was a super jumbo sized pin and featured Mickey Mouse playing the role of Scoop. The pin was so popular that it lead to additional pin collections. In 2008, we released “The Scoop,” a collection that featured Scoop reporting on fun facts about the Walt Disney World Resort. This collection was followed by “Scoop and Friends” in 2009 that featured Scoop and other friends from Main Street, U.S.A. In 2010, we featured Scoop Sanderson on a specially designed Disney Trading Night pin. The pin was released in March 2010, and Scoop made a surprise visit to meet and trade with Guests that night. 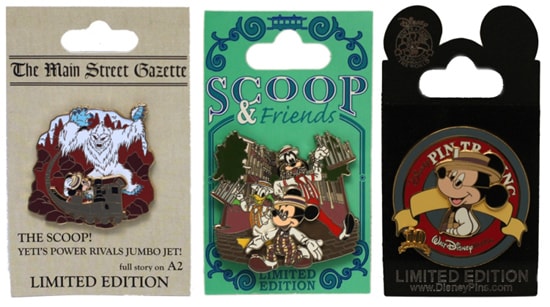 Steven: “For someone who is brand new to Disney Pin Trading, what is the best advice you can give her or him?”

Scoop Sanderson: “The best advice I can give is collect what you like! There are so many pins to collect. Trust me, I’ve tried trading for them all. But you have to collect or trade what you like. If you find you don’t love a pin anymore, I guarantee someone else will. So trade it away – you won’t hurt its feelings.”

Steven: “Do you have a favorite trading experience from Main Street, U.S.A.?”

Scoop Sanderson: “I love when a Guest comes up to me and asks, ‘May I look at your pins please?’ It is typically a kid who has grown up but learned that phrase long ago from me. It is a good feeling to know a Guest enjoyed trading so much that she or he returned to Main Street, U.S.A. to trade pins. I only hope that the Guest will pass on the trading legacy to others.”

As part of Disney Pin Celebration – Trade City, U.S.A., I invited Scoop to join us for this annual trading event held at Epcot. We created a limited edition pin featuring Figment dressed as Scoop Sanderson (a first of its kind) breaking ground for an event in 2011.

Steven: “Do you have any final tips that Guests should remember when trading pins?”

Scoop Sanderson: “Be nice as you never know what kind of surprises or magic may happen when trading pins with others. Make magic for others as pins have the ability to make people smile. You never know who might become your next pin pal. One thing I’ve learned is there are many treasures on lanyards, but really lanyards are on the treasures – great friends.”

Pin Pals can trade pins with Scoop Sanderson on select days on Main Street, U.S.A. at Magic Kingdom Park. If you have traded pins with Scoop, I’d love to hear your stories.