Who’s the Baddest of Them All? Vote for Your Favorite Disney Villain

It’s Halloween Time at the Disneyland Resort, and the Disney Villains are claiming this is their time to rule Disneyland park. Starting today, you can join the fun online and vote for your favorite villain on Disneyland.com.

Here are the Disney villains in the running:

Jafar – The all-powerful sorcerer from “Aladdin” is full of wicked magic tricks. His cunning plan is to betray the kindly Sultan, steal the magic lamp, wed Princess Jasmine and rule forever.

Maleficent – This self-proclaimed “Mistress of All Evil” can really hold a grudge when she’s not invited to the party. On Princess Aurora’s sixteenth birthday, she lures the innocent maiden to prick her finger on a spindle and fall into everlasting slumber. Then when Prince Phillip comes to rescue the Sleeping Beauty, she transforms into a monstrous, fire-breathing dragon! How medieval can you get?

Ursula – This dreadful sea witch will sink to any depths to carry out her evil deeds! With the help of two slithering eels, she torments undersea creatures, steals King Triton’s crown, and captures Princess Ariel’s beautiful voice. After she has the Little Mermaid clutched in her slimy tentacles, she conjures a massive sea storm and wages a vicious battle with Prince Eric. Could you “cast” your vote for someone this slippery?

Evil Queen – Mirror, mirror on the wall, who’s the most insanely jealous of them all? This narcissistic ruler commands a huntsman to take her stepdaughter into the forest, do away with her, and bring back her heart. When the Magic Mirror reveals that Snow White is alive and still the “fairest in the land,” the Queen transforms herself into a hag and convinces the innocent princess to take a bite of a poisoned apple. We think you’ll agree this Queen is truly “heartless.”

Captain Hook – This elegant but vengeful villain anchored his ship and crew in the waters of Never Land, only to see revenge upong Peter Pan. Hook locks up Tinker Bell, sends a ticking package to Peter Pan, kidnaps the Lost Boys and forces Wendy to walk the plank. and repeatedly attacked Peter Pan and his crew with swords and schemes to exact lasting revenge.

Cruella De Vil – This devilish lady stops at nothing when it comes to satisfying her need for greed. She thinks everyone is an imbecile and anything can be bought. She’s a crazy driver who’ll run you down with her fancy car. She plots! She steals! She dognaps 101 Dalmatian puppies just to make the perfect fur coat. The only thing perfect about Cruella De Vil is her name. Like the song says, “If she doesn’t scare you, no evil thing will.” 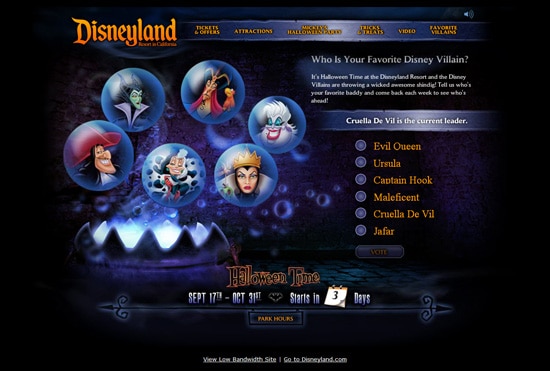 These villains will be battling each other for the title of the baddest villain of them all, now through October 28. The voting starts today at disneyland.com/halloween, and be sure to follow us on Twitter for the latest updates.

Likes (1)
Share Who’s the Baddest of Them All? Vote for Your Favorite Disney Villain

Destinations: Who’s the Baddest of Them All? Vote for Your Favorite Disney Villain