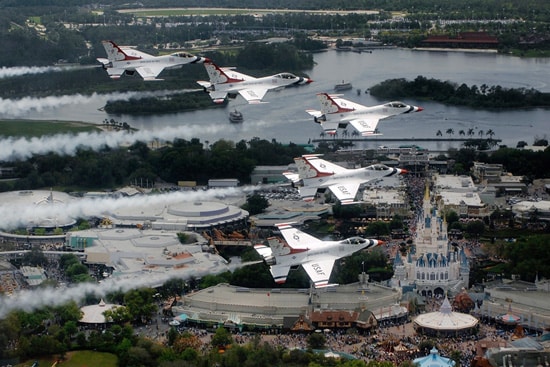 Next week, we’re celebrating “Hometown Heroes” at Magic Kingdom Park in honor of Air Force Week in Central Florida. And the day will include quite a sight – the United States Air Force Thunderbird jets flying over Magic Kingdom Park. The flyover will be Tuesday, October 26 at about 3:15 p.m. Also, United States Air Force dignitaries will be honored during the day at the park’s “Celebrate a Dream Come True” parade.

And you may not have seen this yet, but we’ve launched a new Facebook game inspired by this year’s Epcot International Food & Wine Festival. The game puts you in the middle of the Festival serving up dishes from around the world. It’ll only be available for a limited time so go and check it out and then let us know what you think.

Now, here are a few other items that didn’t make it to the Disney Parks Blog:

Create Your Own Haunted Gingerbread House — Want to make your own haunted gingerbread house this Halloween? Learn how this weekend at Ralph Brennan’s Jazz Kitchen at the Downtown Disney District.