Guests visiting us now have the opportunity to see two species of animals that are new to Disney’s Animal Kingdom – the emperor tamarin in Rafiki’s Planet Watch and the addax on the Kilimanjaro Safaris. They join the more than 1,500 animals representing over 300 species that make their home at our theme park. 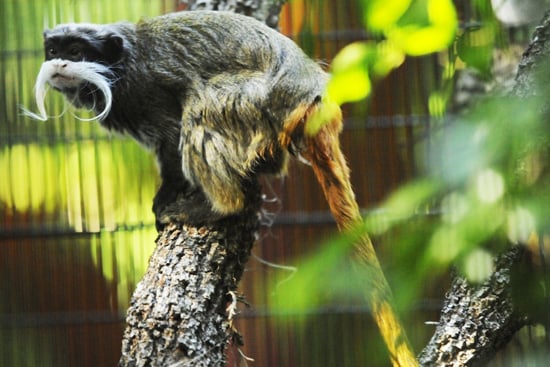 A pair of emperor tamarins (gotta love the mustache!), a male and a female, have joined the cotton-top tamarins and the golden lion tamarins on the trail to Conservation Station in Rafiki’s Planet Watch. There are only 34 emperor tamarins in U.S. zoological parks, and the pair came to Disney’s Animal Kingdom as a recommendation from the Population Management Plan program coordinated by the Association of Zoos and Aquariums, which means that a baby emperor tamarin would be a welcome event! Emperor tamarins naturally range in Brazil, Peru and Bolivia.

Five male addax, a kind of African antelope, recently made their debut on the Kilimanjaro Safaris. Addax are best known for their long, corkscrew horns. Once widespread across North Africa, the addax population has been severely reduced due to over-hunting. They also are impacted by long periods of drought. Addax are critically endangered with estimates indicating that there are fewer than 300 in the wild.

I never cease to be amazed at the wonderful diversity of wildlife! It’s a privilege to be able to provide our Guests with the opportunity to see animals of all shapes and sizes and to help them understand what all of us can do to protect wildlife and nature.