On the Set of Star Tours with C-3PO

Things are very busy in the world of Star Tours, both here in California and in Florida as well!

A few weeks ago I shared a first look at two new characters joining Star Tours, and today, I want to take you behind the scenes and show you what we were working on back in April 2009. We occupied a large soundstage in Hollywood to film a key sequence of the new show. Anthony Daniels flew in from London to bring C-3PO to life on the stage, as well as workshop the script with our writer Steve Spiegel.

I spoke with Anthony Daniels the other day about what it felt like to be back working on Star Tours.

“Wow! Back in the gold suit for the first time since ‘Revenge of the Sith,’” was Anthony’s reply. “But on this occasion in front of a beloved Starspeeder, a bit like the one R2 and I’d repaired every day since Disneyland first opened the Star Tours Spaceport all those years ago. I’d enjoyed being a part of the original Star Tours, one of the most wonderful jobs I ever had. I’d been alerted that amazing things were in store for passengers on the new Starspeeder – and for me too – and so here I was again, working with many of the same creative teams, with even more spin and excitement than the first time.”

On the immense soundstage, our production team re-created – full size – a portion of the Starspeeder 1000, so we could film it from multiple angles. Later, the effects wizards at ILM, under the direction of Bill George, completed the scene, adding in a whole range of droids and characters, and expanding the scale and scope of the scene.

Here, for the first time, are some photos from that soundstage shoot. More on Threepio in our next post. 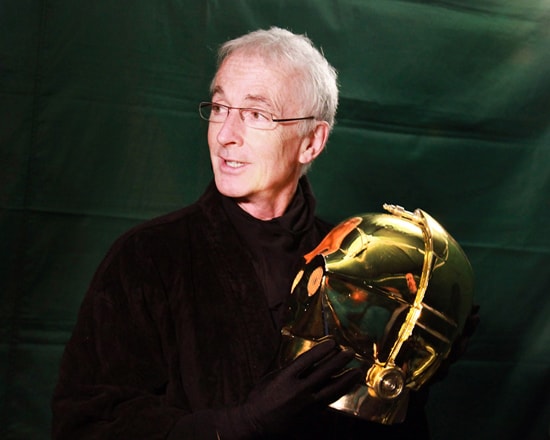