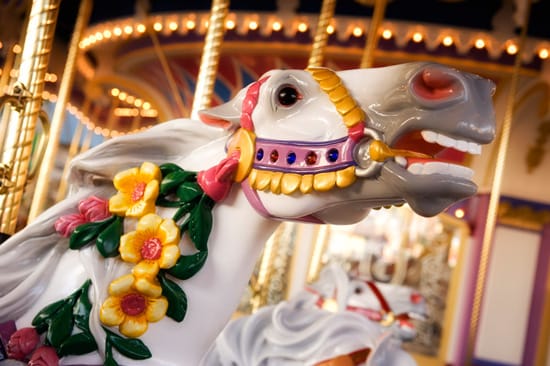 Recently, I spent time with a historic and iconic attraction in Fantasyland. The sun had not yet cleared the horizon, and the Magic Kingdom was quiet but for the routine pre-open chores being tended to by fellow cast members. I would like to share some of my images with you, along with some tidbits of history you might enjoy. It is said that the word carousel dates back to the 12th century, and was actually a cavalry training exercise. In Italian, the word was garosello, and in Spanish, carosella. The French later adapted their version of “carrousel,” which involved elaborate displays of horse and rider routines performed as entertainment for royalty.

During the 18th century, the French developed a rotating device that featured carved horses and chariots that would go up and down, and those early carrousels were powered by mules, men and later, steam. 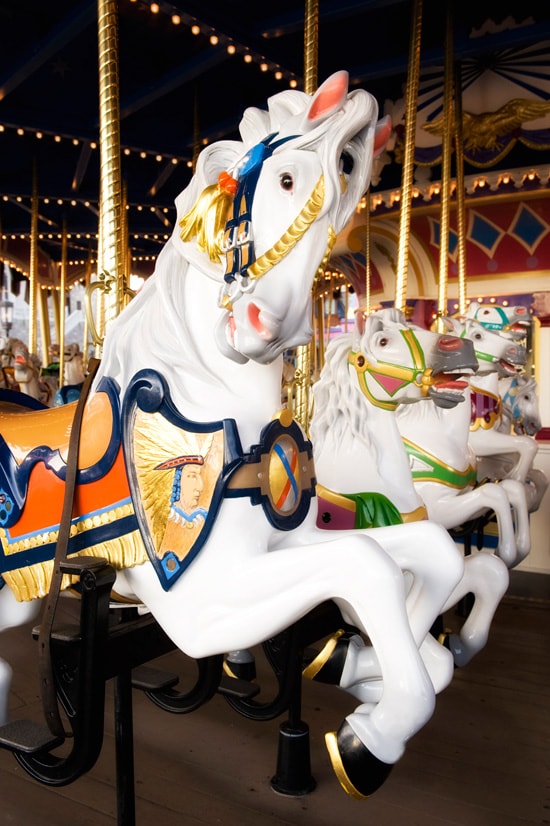 As merry-go-rounds became prevalent across the U.S., the Philadelphia Toboggan Company achieved great success, building approximately ninety of them before the Great Depression. They had the finest German and Italian wood carvers of their day. Each one was numbered, which brings us to Number 46 – The Liberty Carousel, built in 1917-1918. Originally delivered to Belle Isle Park in Detroit, it later appeared in New Jersey’s Olympic Park in Maplewood, N.J.

The Liberty was acquired by The Walt Disney Company in 1967, refurbished and painted to its present style and condition, and became the focal point for Fantasyland. 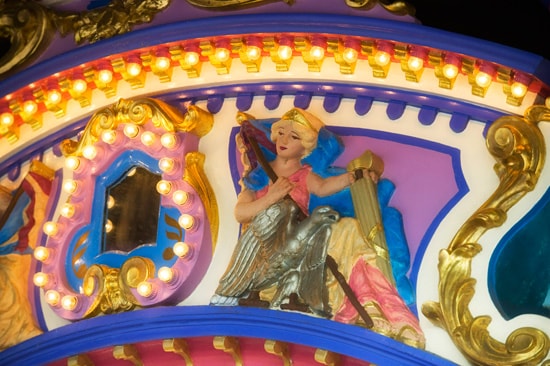 Most of the beautiful “jumpers,” as they are called, are hand-carved from maple wood. There are a few fiberglass horses that were cast from originals, but you can’t tell the difference unless you perform the “thump” test …

All of the exquisite equines are painted white because white horses have been depicted as “heroes” during the ages, and everyone wants to be a hero.

Its theme of pride and patriotism is reflected throughout the Carrousel, as well as that of medieval bravery.

There are ninety steeds galloping, and one lone chariot. The chariot, original to Liberty, was lost during refurbishment, and rediscovered in 1997, when it was installed. In 1971, during the installation of the carrousel, Roy O. Disney observed that its placement was off-center from the Cinderella Castle breezeway by eight inches. It was moved to its present position, centered.