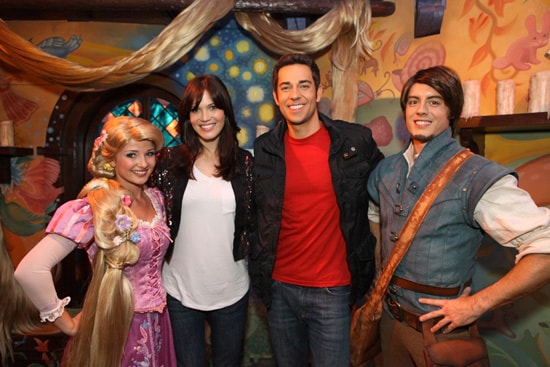 This past weekend, the people who brought Rapunzel and Flynn Rider to life in the Disney film, “Tangled,” had a chance to meet the characters in Fantasyland at Disneyland park. Mandy Moore, voice of Rapunzel, and Zachary Levi, voice of Flynn Rider, were at Disneyland park doing interviews to celebrate the film’s upcoming release this Thanksgiving. During their visit, they headed over to Fantasyland to see Rapunzel and Flynn Rider for the first time in the Park. While they were here, we caught up with them to ask a few questions about their exciting new movie.

The directors of the film, Nathan Greno and Byron Howard, also talked with us about creating this film. They told us they enjoyed creating a comedy that features hilarious characters, and is also an action-packed film that includes horse chases, sword fights, prison breaks and floods. Take a peek.

“Tangled” will appear in Disney Digital 3D in theaters November 24, and Rapunzel and Flynn Rider are now greeting guests at both Disneyland and Walt Disney World Resorts.