Several avid golfers got to hit some special shots recently during the PGA Tour golf tournament at Walt Disney World Resort. The handful of golfers, who came from as far away as Missouri and Virginia, were treated to a one-of-a-kind golf clinic with a Disney teaching pro and NBA legend Julius “Dr. J’’ Erving. 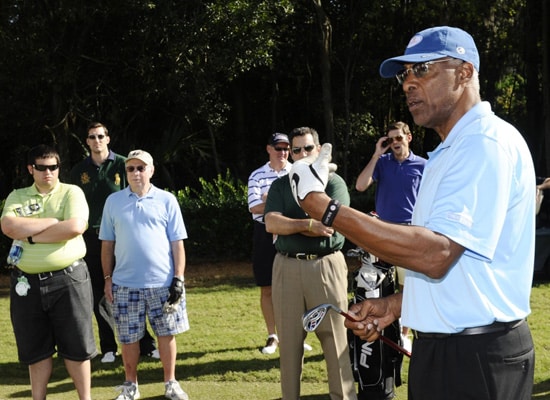 Erving is an avid golfer who played in the pro-am division of the PGA Tour’s Children’s Miracle Network Classic at Disney. After his final round, Erving participated in the clinic, telling the group all about his passion for golf, answering questions and even offering some golf tips of his own. Everyone in the clinic walked away with an Erving autographed golf ball and spent the rest of the day watching the Tour pros battle it out for one of the more coveted titles among the PGA Tour’s Fall Series. In the end, Robert Garrigus birdies the 17th hole to hold off his nearest challengers.

Officially, Garrigus was the winner, but a handful of average golfers walked away probably feeling like big winners too.