Inside the Disney Dream

Can you believe it’s only been a few weeks since the Disney Dream made her public debut? So much has happened since then.

After the ship floated out from the dry dock where she was built in Papenburg, Germany, work has continued taking place all throughout her interior to prepare for the first Disney Cruise Line guests early next year.

In a couple of recent blog posts we asked what you wanted to see inside the Disney Dream so I’m thrilled to offer an exclusive peek at some of the fantastic spaces coming to life aboard the ship.

Here’s a view of the three-deck atrium lobby taken earlier this month. It’s the first sight that will greet guests when they board at Florida’s Port Canaveral. 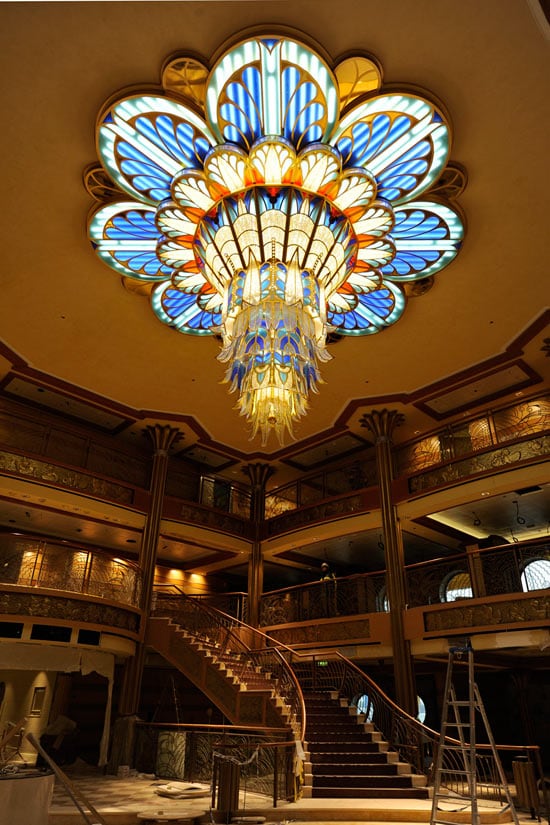 Wow, huh? Now imagine what it will look like when finished.

The Art Deco chandelier was custom designed for the Disney Dream and measures seven meters in diameter. Decorated with Swarovski crystals, it’s covered with 24-karat gold plating and cascades four meters down from the atrium ceiling.

Some of the areas you asked to see are featured in today’s video and photo gallery, including a few nearly finished staterooms, the pools on Deck 11, the Deck 3 atrium, Animator’s Palate, the Vibe club for teens on Deck 5, the Pink champagne bar for adults on Deck 4 and the Senses Spa and Salon on Deck 11. Enjoy!

I’ll have more photos to share next week, including a look at Royal Palace and Enchanted Garden, two of the rotational restaurants guests will enjoy on every cruise.

Tell us if you like what you see and we’ll keep sharing more sneak peeks with you.