Interview with the Mouseketeers at Disneyland Resort

Just last month I had the unique opportunity to sit down with a few of my fellow colleagues and some very special guests, who were all “ears” when it came to talking about the 55th Anniversary of the Mickey Mouse Club. I thought I’d share a few of the highlights from our conversation with you. 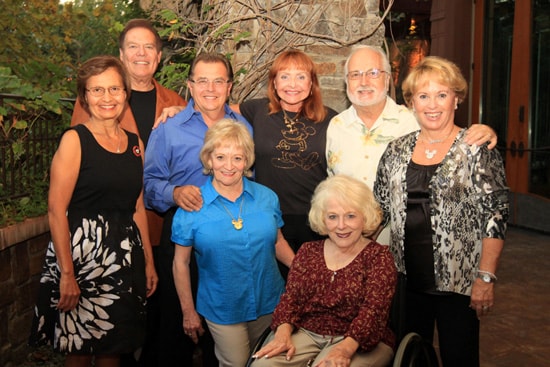 Michelle: What do you remember about your Mouseketeer audition?

Sherry: My brother Roy was a drummer. He was auditioning and the director asked if he could play another instrument, because they already had Cubby playing the drums. Roy said no, but I have a little sister that can play the trumpet and do a tap dance at the same time. The next day I went to the studio, played the trumpet, did my tap dance and almost knocked out all of my teeth. But I got the job!

Michelle: What was the best part about being a Mouseketeer?

Sharon: That 55 years later we are all here together again like it was just yesterday. That is the best thing.

Bobby: We’ll always be friends throughout the years.

Tommy: How lucky it was to go to work and do something you really loved every day and be able to perform. We had a wonderful childhood.

Michelle: Given all the time you have spent as a Mouseketeer is there one memory that stands out in your mind?

Bobby: We can all attest that one of our favorite memories was working with Jimmy Dodd. He was a great leader for us, inspirational and positive. He treated everyone equally and always had a smile on his face.

Karen: It was Jimmy. He was a hero and a mentor.

Doreen: The power of Walt Disney and his gift for creating something so true and honest that touches the American spirit. When I was in Vietnam entertaining the troops I wanted to be known more as a rock-and-roller than a Mouseketeer. Inevitably at the end of every show, some GI would find a pair of Mickey Mouse ears and one by one they would pass it down and you would see a whole field of guys standing at attention singing M-I-C-K-E-Y M-O-U-S-E. They were all that age.

Cubby: I’ve traveled all over the world since the Mickey Mouse Club and have had the opportunity to meet many notable celebrities and entertainers. It’s funny because they always seemed to introduce me as Mouseketeer Cubby. There wasn’t a show that went by that someone didn’t come backstage and would tell me how much of an impact we had on them, since they grew up watching the show.

Michelle: What special memory or feeling about Walt Disney do you cherish?

Sherry: I remember like it was yesterday – my first day in costume. I had watched all these other kids on TV and sat with my plastic ears on dreaming of being a Mouseketeer. So when I finally was one, I was so proud. I had my uniform with my name in two inch letters across the front and was walking with my mom and Mr. Disney comes by and says “Hi Mouseketeer Sherry.” I was so thrilled and I said “Mommy, mommy, Mr. Disney knows my name.” It wasn’t until years later that my mom said “Yes honey, Mr. Disney could read.”

Karen: On opening day of the Alice in Wonderland attraction, I got to ride the attraction with Mr. Disney.

Tommy: I think all of us had a very warm feeling with Mr. Disney. He was always very respectful of us. It was a great experience growing up at the studio with him. We knew he was the boss and the buck stopped with him. We were sort of in awe of him and he was quite good to us.

Michelle: There are so many young people who aspire to have careers like yours. If you could share one piece of advice for young people what would that be?

Mary: Hold on to the dream, that is the main thing. Focus on the skills and then also picture yourself doing it. I remember when my mom showed me an article that Walt Disney was creating a TV show. I just pictured myself in it.

Michelle: Disney Parks just launched a new program called “Let the Memories Begin” in which guests can share their favorite memories, photos and videos. What is one of your fondest memories of visiting Disneyland park?

Tommy: Seeing the smiles on my kids’ faces, especially the first time they met Mickey Mouse.

Sherry: There is nothing better than bringing your grandchildren here 55 years later, it’s magical.

Sharon: Coming here for my honeymoon.

Bobby: When we weren’t performing we would go out in the park and sign autographs, all trying to out do one another. Annette would do hearts and I would have my Zorro with my B and my G.

Doreen: People who work for Disney strive to show the world the best that America can be. When you come to Disneyland it’s honestly a little Main Street, and a little U.S.A. That is the magic of Disneyland.

I hope you enjoyed it! Be sure to keep an eye out for next month’s featured artist in the “Celebrating the Art of…” series.

Likes (0)
Share Interview with the Mouseketeers at Disneyland Resort