Nearly 500 VoluntEARS Make a Wave – and Do the Wave! – During Ocean Cleanup

Enthusiastic Disney VoluntEARS couldn’t resist doing “the wave” before “making a wave” to help our oceans by heading out over the weekend to clean up the Brevard County coast line. VoluntEARS worked in partnership with the Ocean Conservancy, Keep Brevard Beautiful, United States Coast Guard and the Canaveral Port Authority, as part of the annual Florida Coastal Cleanup. I had the honor of welcoming the VoluntEARS and assisting in the cleanup, and I can say without hesitation that there’s no better way to spend the morning. After all, what’s better than enjoying the natural beauty of Florida while helping to protect it?

Joined by friends and family, nearly 500 VoluntEARS – a record number – helped make the beaches safe for marine wildlife and more enjoyable for everyone by cleaning up 2,500 pounds of trash on nearly four miles of coastline near the Disney Cruise Line terminal in Port Canaveral. 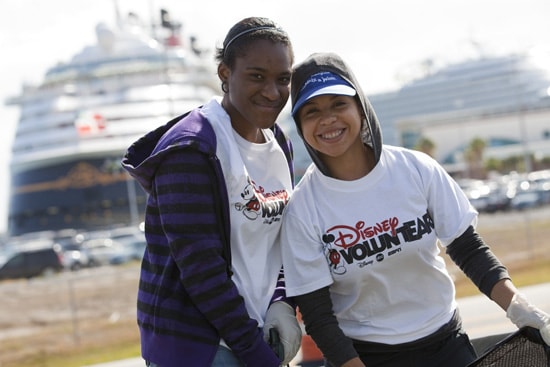 Trash in our oceans is an on-going, year-round problem. In addition to participating in waterway cleanups in your community (all waterways eventually lead to the ocean!), you can start a “sea of change” by minimizing waste. For example, since most of the litter collected during cleanups consists of disposable items, you can help by choosing reusable shopping bags, water bottles, coffee mugs and food containers.

Likes (0)
Share Nearly 500 VoluntEARS Make a Wave – and Do the Wave! – During Ocean Cleanup