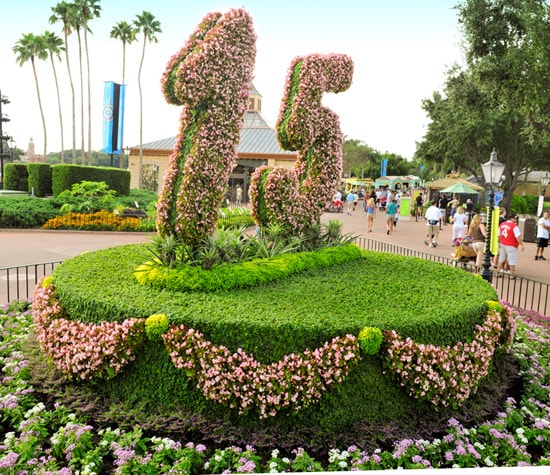 To celebrate this year’s 15th anniversary of the Epcot International Food & Wine Festival, Disney’s Horticulture was called upon to provide the festival with a cake that keeps on growing. Backstage at the Walt Disney World Nursery a few months before the festival began, a crew of Disney’s Horticulture cast members were busy designing a living cake to debut at World Showcase plaza. The sphagnum topiary cake appeared on opening day of the festival weighing in at 9,000 pounds with the eight-foot number 15 on top adding an additional 1,200 pounds, making the total weight a colossal 10,200 pounds! With a cake that big it required a crane to set it in place.

The cake’s recipe required 55 bales of 3.5 cubic feet of sphagnum moss to stuff the frame and some 6,000 assorted plants with 22 pineapple plants embellishing the top.