Last week I took you inside the Disney Dream for an exclusive look at some of the areas you asked to see aboard our newest ship, which is nearing completion in Germany.

Today I’ve got more terrific photos that show a small sample of the creativity and fun Disney Cruise Line guests will discover on every deck. These are a few of the spaces you asked to see in recent blog comments so keep the requests coming and we’ll do our best to deliver.

Recognize this familiar face? Eye do! 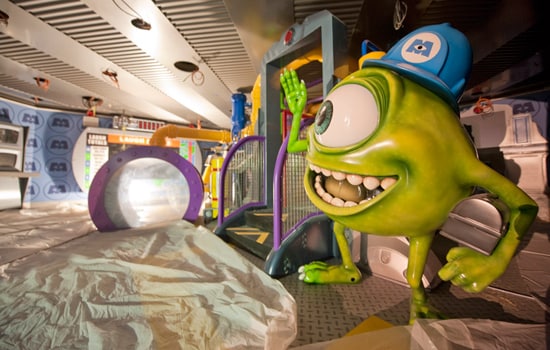 It’s Mike Wazowski from the Disney∙Pixar film “Monsters, Inc.” He’s got a starring role in Monsters Academy, an interactive space for kids inside Disney’s Oceaneer Club on Deck 5.

The wisecracking monster reminds me that much of the Disney Dream still requires hard hats as workers continue putting the finishing touches on the ship’s 14 decks. Fortunately, photographers in hard hats have been there too, chronicling the day-by-day progress that brings us closer to her maiden voyage from Florida early next year.

Today’s photos include sneak peeks at Andy’s Room and Pixie Hollow, two of the other fun spaces awaiting children ages 3 to 10 in Disney’s Oceaneer Club, and a glimpse inside the magnificent Walt Disney Theatre, which will present the brand-new musical “Disney’s Believe,” along with “The Golden Mickeys” and “Villains Tonight!”

Rounding out today’s gallery are pictures of the Buena Vista Theatre, some of the ship’s elegantly decorated public areas and a taste of Palo, a redesigned version of Disney Cruise Line’s signature specialty restaurant for adults.

I promised a closer look at the three rotational restaurants aboard the Disney Dream last time but you’ll have to wait until next week for that. We’ve got something else planned to share with you later this week.

Based on what we’ve shown so far, what are you most excited to see in person?