Curtain Set to Rise on Spectacular Theaters Aboard the Disney Dream

Over the past few weeks we’ve given you sneak peeks at many wonderful features aboard our newest ship, the Disney Dream, which will welcome its first Disney Cruise Line guests next month in Florida.

You’ve explored the beautifully-themed restaurants that will host our guests each day, you’ve taken a virtual ride on the AquaDuck water coaster, you’ve glimpsed our first premier dining experience and you’ve previewed a few of the ship’s chic lounges for adults.

Let me welcome you to another magnificent venue, the Walt Disney Theatre. 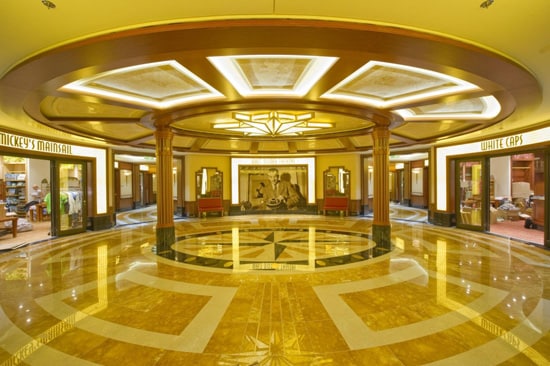 Takes your breath away, doesn’t it? And that’s just the entrance! What’s even more amazing are the live shows that will take place inside every night.

By the way, don’t mind the clutter in the adjacent retail shops. We’re still getting the ship ready but we’ll have everything tidied up by the time she reaches Port Canaveral in a couple weeks.

The 1,340-seat Walt Disney Theatre is located at the forward end of Deck 3 with balcony seating accessible from Deck 4. It’s one of the most technologically advanced theaters at sea or on land and it’s where our guests will be entertained every night with Broadway-style stage shows exclusive to Disney Cruise Line. During the day it’ll also present first-run movies, including some in Disney Digital 3D.

At midship on Decks 4 and 5 is the 399-seat Buena Vista Theatre, an Art Deco cinema that will screen first-run films and other popular movies, some in Disney Digital 3D too.

But enough from me. You want to see what’s inside these terrific palaces, right?

Here’s an exclusive preview of both theaters, including a few computer renderings and a sneak peek at rehearsals for the original stage spectacular that will debut aboard the Disney Dream, “Disney’s Believe.”

Meanwhile, the ship is finally on her way to Florida! The Disney Dream departed Bremerhaven, Germany, a couple days ago and is making the transatlantic voyage to Port Canaveral with a few brief stops planned in between.

I’ll be going aboard later this week when the ship reaches Tenerife, a Spanish island off the northwest coast of Africa, and will continue sending sneak peeks as the crew brings her home.