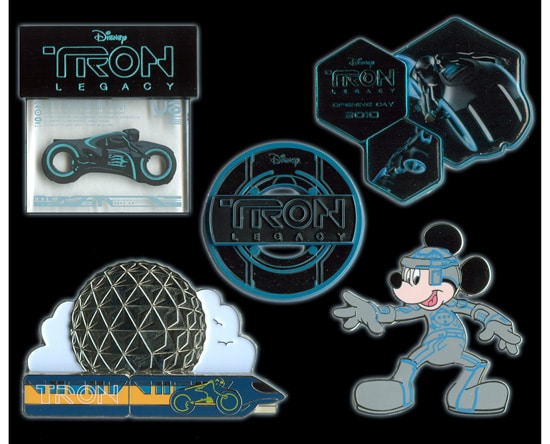 Greetings, Programs! I just finished playing “Space Paranoids” and thought I would give you an update about some pins we have created for “TRON: Legacy.” I spoke with Julie Young, developer for open and limited edition pins, about some of these new items. But before I get to those items, we must return to the past. This isn’t the first time we’ve created Tron-themed pins. I dug into my personal collection for a brief look back. 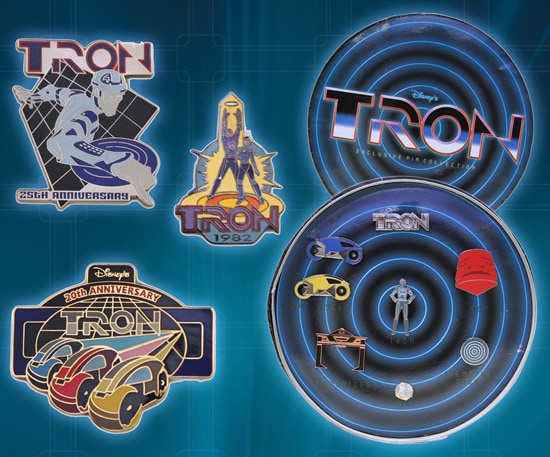 Since the release of “Tron” on July 9, 1982, there have only been a handful of Tron pins made (making collecting Tron pins somewhat easier than steering a Recognizer). Some of the first pins date from the early 1980s and were mostly promotional or jewelry-style pins (think brooch or plastic pins). With the introduction of Pin Trading in 1999, the number of Tron pins has grown. Pictured above are examples of pins created by Disney Parks, Disney Stores and the former Disney Catalog. There have also been pins created by the former Disney Auctions as well as Walt Disney Imagineering. There was even a “Space Paranoids” pin given to guests attending an ENCOM press event in April 2010. Sadly, I do not have any of the latter mentioned pins (and I am sad).

But I’m happy to see some new Tron pins on the Game Grid. Julie shared details behind the open edition Mickey Mouse as Tron pin.

“I like having Mickey Mouse play different roles for the pins I create,” said Julie. “I wanted the line work on his suit to glow in the dark. Unfortunately, I learned that the blue color featured on the pin doesn’t have a glow in the dark option.” 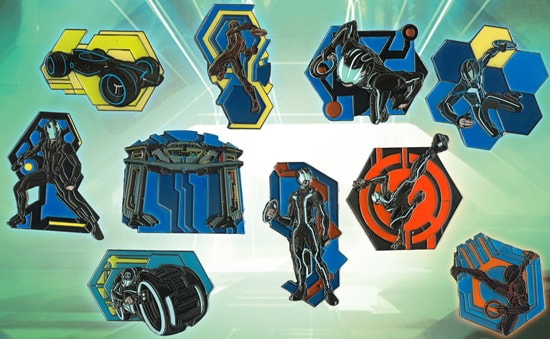 Julie, however, made some pins from the “TRON: Legacy” limited release mystery set glow. There are 20 different pins in this set – 10 that are full color and 10 chaser pins created in a different base metal color. I opted not to show those “chaser” pins as it would defeat the purpose of the game.

One of my favorite new pins features the Tron-orail. I recall the day in March when I saw the photos of it on the Disney Parks Blog. I immediately ran down to the product developer’s office pleading to have a Tron-orail pin. It took several art concepts including one that placed the Tron-orail in front of the Magic Kingdom (?!). The first sample of the pin was much smaller than the final version pictured at the top. During a recent visit to Epcot, there was nothing sweeter to my ears than hearing my son scream, “Dad, it’s the Tron-orail” as it glided through Future World. I think I did the same when I saw the final pin (just ask Julie).

The last item I have to share today is also pretty sweet. Chris Chapman from Disney Design Group stopped by my office to share this first mock-up. The image above is a boxed pin set coming to the Sci-Fi Academy event on June 24, 2011, at Disneyland Resort. The packaging is incredible and the identity disks…well, they are “nice!” End of line.