I love sending holiday cards with handwritten greetings for good health and holiday cheer. One thing I always need is a good pen. I recently discovered some that are the perfect “kompanions” courtesy of Kevin-Michael Lezotte, Product Developer for stationery and electronic accessories. I’m talking Kooky pens and Kevin-Michael has been leading the development of these pens for Disney Parks.

“Here, smell these,” said Kevin-Michael as he showed me the two newest limited edition Kooky Kollections created for the holidays (yes, everything has a “K,” not a “C”). “The Mickey Mouse set smells like peppermint and the Donald Duck set smells like gingerbread.”

They did smell wonderful, like Christmas morning. I proceeded to spend the next hour smelling both sets. The scents come from little Mickey Mouse icons attached to each of the pens. The three-pen sets have an edition size of 5,000 each and will be sold at Disneyland Resort and Walt Disney World Resort. Retail is $24.95 for each set and the ink is refillable (which is great since I write a lot).

I asked Kevin-Michael for a brief history of our relationship with Kooky pens. “We introduced these pens about two years ago as a partnership with Courage Brands, Inc. who manufactures Kooky pens,” he explained. “It has been wonderful to bring fun, engaging and creative Disney designs to these pens. Since 2008, we have released more than 80 different designs, and we have many more on the way. They are also now found in Disneyland Resort Paris and Hong Kong Disneyland will release them in December.”

The artwork for the pens is created by Cody Reynolds and Costa Alavezos from Disney Design Group using a stylized template provided by Kooky. Kevin-Michael said it takes about a year to have a pen produced. 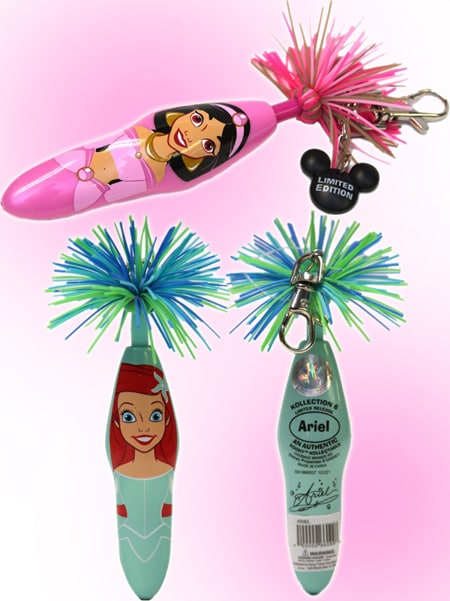 “We work about a year in advance,” said Kevin-Michael. “When selecting the various characters, we review company strategies and key initiatives. At the same time, we like mixing high affinity characters along with characters you don’t see that often. The goal is to give our guests lots of choices.”

I asked Kevin-Michael if he has a favorite one. 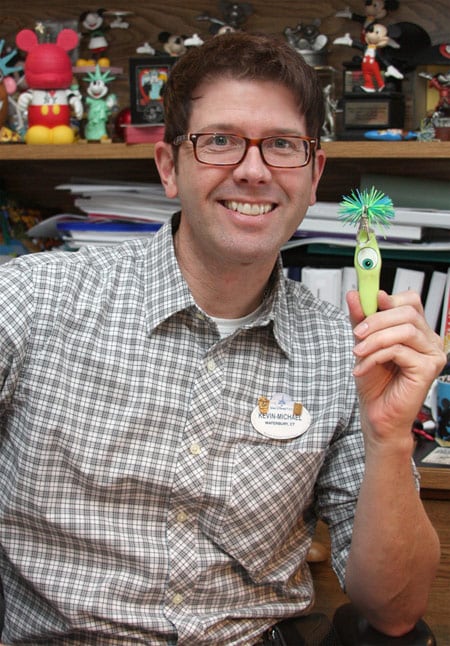 “That’s a tough choice,” he sighed. “Today’s pens are incredibly different compared to when we started. There are now better treatments, applications, art styles and features, like those scented attachments. Yet, I also like simple designs like the pen featuring Mike Wazowski.”

I better return to writing my Christmas cards as the holidays are fast approaching. Before I go, what is your favorite Kooky pen?