The District is Zoned for Nighttime Fun Aboard the Disney Dream

Here’s an early look at Evolution, the premier nightclub coming to the Disney Dream. 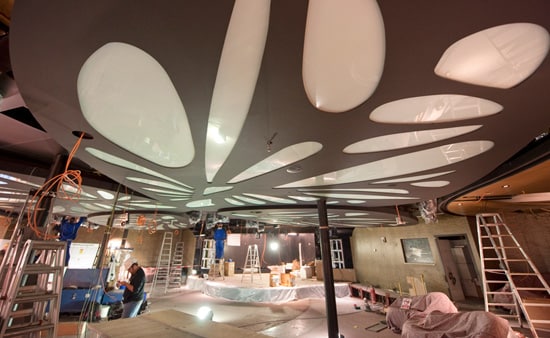 Guess what inspired the striking décor? The evolution of the butterfly!

The club is one of five stylish spaces that make up The District, a nighttime playground for Disney Cruise Line guests 18 and older at the aft end of Deck 4. The interconnected areas continue to, well, evolve, as workers make final preparations for the first passengers to board the brand new ship in Florida next month.

Want an even closer look? Here’s Michael Davie of Walt Disney Imagineering with a recent tour of three of the adults-only venues in The District – Evolution, Pink and Skyline. Included are a few computer renderings that show how each space will look when finished.

Click the images below for a construction photo from a couple weeks ago, followed by, left to right, computer-created views of Evolution, Pink and Skyline.

Elsewhere in The District are 687, a modern interpretation of a traditional pub, and District Lounge, which will feature live entertainment nightly.

In just a few days, the Disney Dream starts the transatlantic voyage that will finally bring her to Florida early next month. I’ll be aboard and will continue sharing exclusive sneak peeks as the ship draws closer to her inaugural cruise from Port Canaveral on January 26.