Continuing our look at famous Disney friends born in the month of January, I found some unique photos of one of the most popular Disney television stars of the 1950s. What’s great is that this actor was actually at Disneyland park in costume for the role he was famous for!

Guy Williams was born January 14, 1924. He portrayed the title role in Disney’s popular television series, “Zorro,” from 1957 to 1959. These photos were taken in April 1958 as part of a series of special appearances inside Disneyland park to promote “Zorro.” In this photo, Mr. Williams can be seen riding his horse near the entrance to Frontierland. It must have been pretty exciting for Zorro fans to see their hero up close in the park! 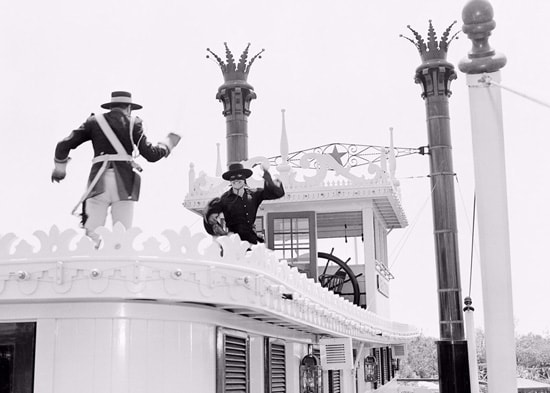 Here, the excitement continues as Williams can be seen dueling with Zorro’s nemesis, Captain Monasterio, on top of the Mark Twain Riverboat!

Check back soon for our next January birthday celebration.