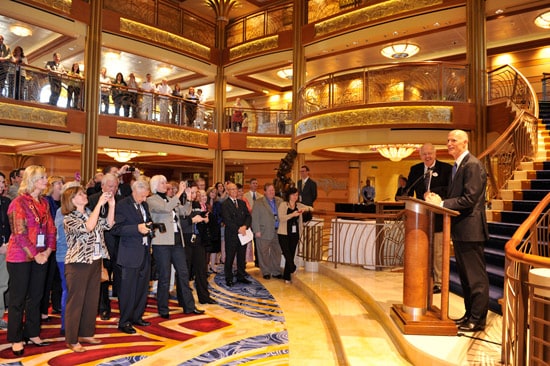 In keeping with tradition, Karl and Captain Tom hosted the port officials and community leaders for the official ceremony in the ship’s grand atrium lobby. Plaques and gifts were exchanged amongst the leaders and Captain Mickey was also on hand to celebrate the occasion. As Disney’s newest and largest ship, the 130,000-ton cruise liner will call Port Canaveral home and sail three-, four- and five-night Bahamian itineraries beginning with the ship’s maiden voyage on Jan. 26. In order to accommodate the new and larger Disney Dream, construction enhancements were made to extend the dock facility and expand the terminal to allow for the additional guests. Port Canaveral also constructed a brand new multi-level parking structure that connects the terminal via a sky-bridge walkway.

The launch of the 4,000-passenger ship is expected to bring sizable economic benefits to the region including nearly 450 jobs and thousands of additional cruise guests.