Disney Dream Getting Ready for Guests

I know what you’re thinking.

“Now that the Disney Dream has arrived in Florida, when do we get to see what she looks like inside?”

Here’s a peek at Royal Palace taken while the ship was on her way to Port Canaveral. The beautifully decorated restaurant is right off the atrium lobby on Deck 3. 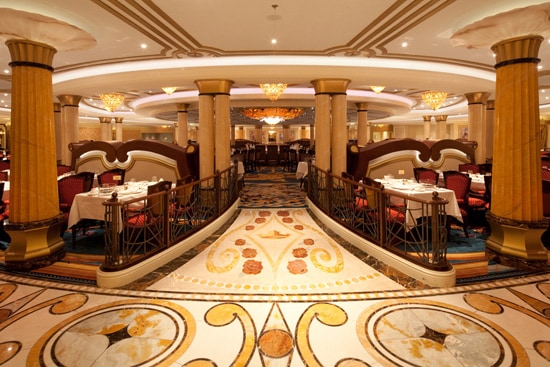 The dining room is filled with fairy tale details like chandeliers decorated with glass slippers and repeating motifs such as Princess Aurora’s tiara from “Sleeping Beauty” and the enchanted rose from “Beauty and the Beast.” I spent more than 10 days aboard the Disney Dream as the ship crossed the Atlantic and I’m still amazed at her beauty and the attention to detail lavished everywhere by Walt Disney Imagineering. Here’s a small sample of what Disney Cruise Line guests will find when they step aboard.

Today’s sneak peeks include a wide view of the Art Deco atrium lobby on Deck 3, the first area guests will see when they board. Next, left to right, are Andy’s Room and Monster’s Academy, two wonderfully fun spaces for kids inside Disney’s Oceaneer Club that were inspired by the classic Disney∙Pixar films “Toy Story” and “Monsters, Inc.” And finally, here’s a glimpse of the Rainforest area within the Senses Spa & Salon for adults.

Let me pause here for a public service announcement: Make sure you bring plenty of memory cards for your camera! And batteries! You won’t want to miss a single shot.

Later this week the Disney Dream will host a traditional “plaque and key” ceremony commemorating her first stop at Port Canaveral. Afterward she’ll sail the first of a few preview cruises that will help crew members prepare for the ship’s gala maiden voyage on January 26th.