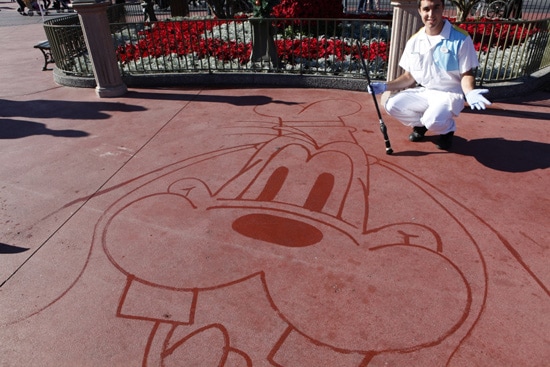 What began as a normal December day in the Magic Kingdom turned into another lesson for me about making Magic. And I have David to thank for it.

As the chill of the morning air began to lift, the park was just opening and Guests were hustling to their first attraction or show of the day. That’s when I spotted David.

A Magic Kingdom Custodial Cast Member from Amherst, N.Y., David was quietly making his way around the Cinderella Castle hub area. Using water as his paint and a custodial broom as his brush, the rose-hued sidewalk under his feet became a giant canvas as he created larger-than-life sketches of Disney characters. Meticulously, and seemingly effortlessly, he created his aqua artwork to resemble Pluto, Donald Duck and even the animated version of The Mad Hatter.

As David moved around the hub to his next sketching spot, I watched as several guests went from a fast-walk to a dead-stop — in an instant — to take a look at what was under their feet. They stood, soaked it in and motioned to friends and family to see what they had spotted. One Guest even sat down on the sidewalk, in the middle of The Mad Hatter sketch, to have her photo taken. She told her friend it was the “coolest drawing” she had ever seen of her top-hatted hero from Wonderland.

Across the hub, David glanced over at the activity and smiled. While these Guests never knew how The Mad Hatter sketch got there, or even who sketched it, to them it was Disney Magic.

And I expect that made David pretty happy.