How Do We Give Every Disney Dream Guest an Ocean View? It’s Magic!

Starting today, we’re counting down to Wednesday’s maiden voyage of our newest ship, the Disney Dream, with daily previews of some of the great amenities and dazzling innovations that await Disney Cruise Line guests.

First up is a great example of what Walt Disney called “plussing” – taking a great idea and making it better.

When designing the 1,250 staterooms aboard the ship, the creative minds of Walt Disney Imagineering decided early on that every guest should have an ocean view. The challenge was how to do that within the 150 inside staterooms at the center of passenger decks.

The answer was the Magical Porthole, a real-time view outside the ship from four high-definition video cameras that correspond to each stateroom’s location – forward, aft, port or starboard. 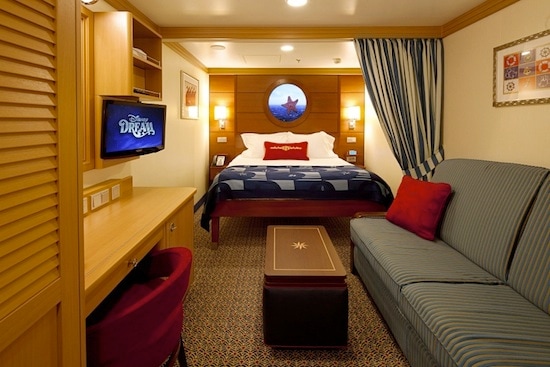 As they say on late-night television… But wait, there’s more!

Here’s Imagineer Bob Zalk with the story of how an already terrific idea was plussed into something uniquely Disney by adding an extra dash of pixie dust.

Approximately three dozen animated characters and objects will pass by the Magical Porthole throughout the day. Familiar faces include Peach the starfish from “Finding Nemo,” Dumbo the flying elephant, the floating house from “Up” and even Mickey Mouse.

Come back to the Disney Parks Blog tomorrow for a preview of the unique cocktails and extensive wine lists guests will enjoy in several Disney Dream venues exclusively for adults.

Likes (0)
Share How Do We Give Every Disney Dream Guest an Ocean View? It’s Magic!