After visiting Nassau in the Bahamas yesterday, the Disney Dream is spending today at sea during her four-night maiden voyage.

On Thursday, Disney Cruise Line guests spent the day enjoying everything from the thrills of AquaDuck, the world’s only water coaster aboard a cruise ship… …to the chic sophistication of exclusively adult venues like Skyline lounge, where the ever-changing penthouse view features famous metropolitan skylines that transform from day to night and showcase a variety of stunning cities.

On Thursday morning, two local marching bands met the ship upon her arrival in Nassau for a lively welcome filled with sound, color and rhythm. For guests who chose to explore the city through Port Adventures, it was a chance to soak up the rich history and culture of the Bahamas. 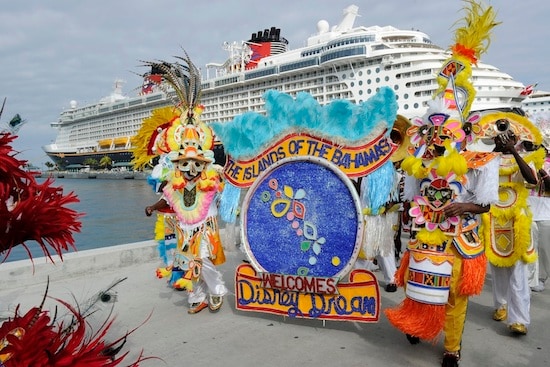 For those who stayed aboard the Disney Dream, it was an opportunity to enjoy all the magical innovations throughout the ship, including fun spaces for children in Disney’s Oceaneer Club and Disney’s Oceaneer Lab, and the grownup entertainment offerings in the five interconnected venues of The District.

After the sun went down, it was time for a ship-wide pirate party, including a special themed menu in the onboard family restaurants, Animator’s Palate, Enchanted Garden and Royal Palace. Up on the pool deck, the fun continued with Mickey’s Pirates IN the Caribbean, an all-ages deck party. 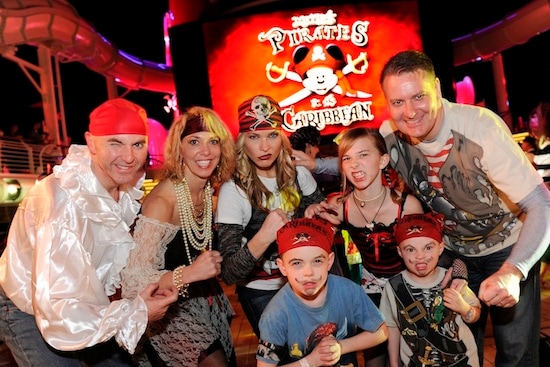 Afterward, a rollicking pirate ship battle broke out under the stars during a brand-new fireworks spectacular called Buccaneer Blast! DJ Randy kept guests rocking during Club Pirate, the hottest dance club at sea, which was followed by a late-night screening of “Pirates of the Caribbean: At World’s End” on the ship’s giant Funnel Vision display. 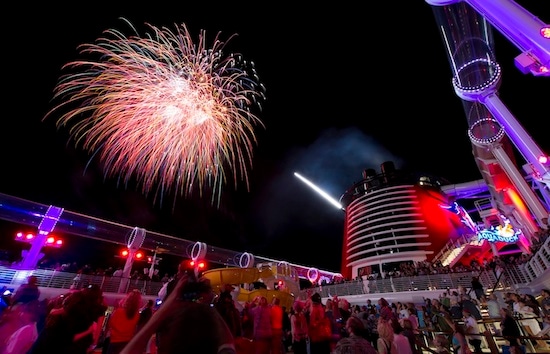 Here arrrrr some highlights from another magical day aboard the Disney Dream:

During Friday’s day at sea, Captain Tom Forberg treated guests with a “drive-by” visit to Castaway Cay, Disney’s private island in the Bahamas, which was hosting our flagship vessel, the Disney Magic. To guests’ delight, a mini Disney concert echoed across the island as the ships tooted their horns back and forth, including many familiar Disney melodies played by the Disney Dream.

Follow Disney Cruise Line on Twitter at twitter.com/disneycruise for real-time tweets and photos during the maiden voyage. Then come back to the Disney Parks Blog on Monday for another exclusive report from the ship – and from the sands of Castaway Cay!