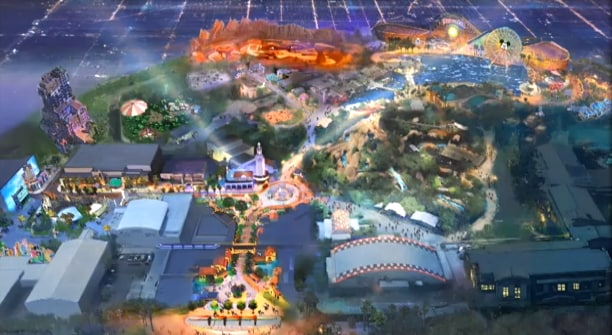 I’ve noticed a curious thing about fans of the Disneyland Resort. As much as they like their favorite shows and attractions, they can’t wait to see what’s coming next to the parks. The hint of a new surprise has its own special thrill.

That’s why fans will be excited to visit the new show at Walt Disney Imagineering Blue Sky Cellar. It opens today with an exclusive preview of the next big attraction coming to Disney California Adventure park: The Little Mermaid ~ Ariel’s Undersea Adventure. Along with dozens of new models and concept drawings crafted by Disney Imagineers, you will see:

One of my favorite parts of the show is the night-time painting of Disney California Adventure park, in the alcove of the screening room. It’s a birds-eye view map that comes to life with 30 moving images that are projected onto the painting. If you stand and watch for a little while, you’ll see bubbles over Little Mermaid, Grizzly Rapids geysers, strikes of lightning at Twilight Zone Tower of Terror, “World of Color” fountains dancing at Paradise Bay and many more. I wonder if you’ll find the “hidden” effect!

Imagineers have used the latest in projection technology to bring this painting to life. It’s reminiscent of the way Walt Disney introduced Disneyland Park to his television guests back in the ‘50s using the latest black-light technology of the time, with a painting by artist Peter Ellenshaw that transformed the park from day to night.

Other highlights of the new show at Blue Sky Cellar include:

You can always check out what’s going on with the Disney California Adventure park expansion at www.disneycaliforniaadventure.com.

Who will be the first person to list 10 of the special effects on the new map of Disney California Adventure park?