We walked through the door and magically were transported across the ocean to one of Paris’ time-honored restaurants, with quiet music and the mellifluous ring of fine china, crystal and silver as a backdrop for our lavish, leisurely evening at Remy, the first-ever premier dining option for Disney Cruise Line. Inspired by one of my all-time favorite Disney films, “Ratatouille,” the elegant dining room is Art Nouveau style with a palate of soft greens, deep reds and rich gold. 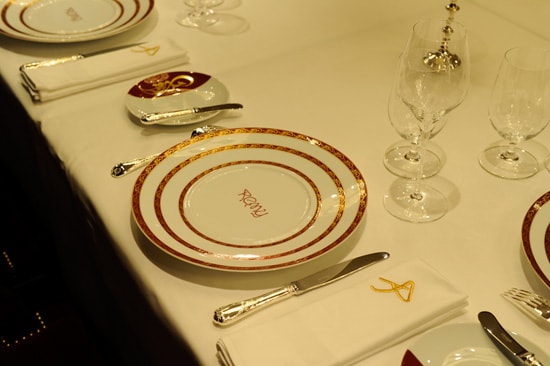 Servers dressed in formal black and white offered crisp Frette linens as my guest and I settled for a delightful evening on a recent preview cruise. We had the good fortune to visit the Disney Dream at Disney’s invitation in order to help her crew prepare for the upcoming maiden voyage.

In Remy, guests must be 18 and older, and men must wear jackets, so it’s a formal affair, with serious French waiters at your beck and call. If you’re intimidated, the easiest approach is to order from one of the two tasting menus: “Goût,” the inspiration of award-winning Chef Scott Hunnel from Disney’s Grand Floridian Resort & Spa; and “Saveur,” the creation of Chef Arnaud Lallement from l’Assiette Champenoise, a Michelin two-star (out of a possible three) restaurant just outside Reims, France. Both are advising chefs for the sophisticated new restaurant. French-trained Chef Patrick Albert, executive chef for Remy, oversees an all-star culinary team.

We sipped a delicious signature chilled Taittinger Champagne cocktail made tableside, followed by five small courses – we paired wines with each for an additional cost. Favorites? The smoked bison with fennel salad and blood oranges, shown below; coastal turbot with Lallement’s signature vin jaune sauce and velvety gnocchi, and buttery Australian Wagyu. But my favorite of all was the simple, inspired “Déclinaison Tomate,” which I called “tomatoes four ways” – the essence of beautiful French cuisine in four sublime tastes. No dish is more than three or four delicious bites, leaving room for sweet endings like a vanilla-poached pear or the to-die-for dark chocolate praline with icy cocoa sherbet topped with a spicy foam.

And those wines! The restaurant offers two wine lists: a special French list with 200 vintages from most every region in France, from which our dishes were paired, with some are available by the glass for ordering a la carte from the menu; and “Remy’s Vault,” a separate and exclusive wine list with rare wines from all over the world.

Remy’s Vault is a small velvet box that is presented at the table by a white-glove sommelier. The vault offers 24 “best-of-the-best” wines from around the globe with the name of each wine engraved on a silver-plated plaque. On that list – a 1947 Château Cheval Blanc, the wine requested by the food critic in “Ratatouille,” that is considered one of the best vintages in the world – Château Cheval Blanc. A single bottle is $25,000!

“Je n’ai plus faim” (I am no longer hungry), I told my waiter as we savored the last bite of dessert, but we couldn’t resist the post-prandial sweets that arrived on a silver platter: tiny salted caramels, whimsical lollipops and macaroons. After nearly three and a half hours of dining, we were ready for a late-night stroll around the ship.

For big spenders, after-dinner libations include Rémy Martin Louis XIII Rare Cask, one of the most sought-after cognacs for connoisseurs, aged in centuries-old casks and served from an elegant Baccarat crystal decanter. We simply couldn’t imagine another sip.

An additional charge of $75 per person is required to dine at Remy, in addition to the cost of wine and alcoholic beverages. Wine pairings for the two tasting menus selected from the French list are an additional $99.

This is quintessential Paris dining on the high seas. Bon appétit!