Greetings, Programs! Okay, so how many times have you seen “TRON: Legacy?” I’m sure you can imagine my answer. If you haven’t seen it, promise me you will get to The Grid soon. In previous articles, I’ve discussed various Tron merchandise. I found another recently released item that is “elect-tastic!” – a “TRON: Legacy” ear hat. I spoke with Megan Kachur, product developer for headwear, and Mark Seppala, Disney Design Group Artist for headwear, about its creation.

“The ‘TRON: Legacy’ hat continues our limited edition ear hat collection,” explained Megan. “For each of these hats, I want guests to feel they are immersed in a particular story. The most important part to me is that the hats are filled with lots of fun details.”

While sitting in her “headwear wonderland” (it’s how she described her office), she showed me some of those details. Trust me, you have to see this office – there are hats everywhere (and so many super cool things coming in 2011).

“I wanted the hat to light up since light is an important part of the film,” continued Megan. “Each ear has identity discs – one representing Sam Flynn and one for CLU. There are switches on the backs of the ears and the batteries can be replaced. I also wanted the Lightcycle to be a key feature as it is another iconic part of the movie.” 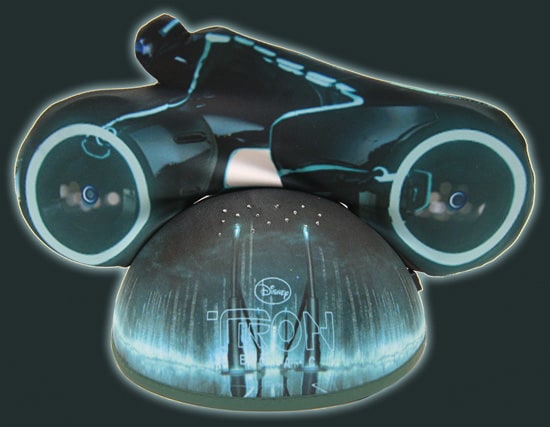 I learned, however, that the final version started out differently. Mark Seppala explained.

“I wanted Sam Flynn’s Lightcycle across the top of the hat,” said Mark. “We created a prototype that had the ears as the wheels of the Lightcycle. After seeing the first sample, it just didn’t work. The material was fabric and didn’t look as sturdy as the Lightcycle looks in the movie.” 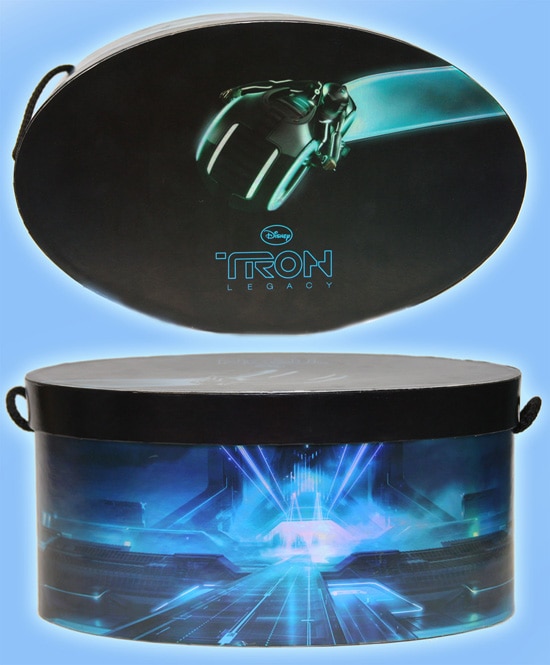 Mark, who has been designing ear hats for two years, further explained the collaborative nature between product developer and artist.

“Megan and I discussed the hatbox packaging,” continued Mark. “It looks like it came exactly from the film – it has that glow found from The Grid. This effect was achieved by printing the design on a foil wrap and that made all the difference. The matte finish we first tried looked too dull.”

The “TRON: Legacy” hat has an edition size of 1,000 and a retail of $79.95. It was released at select locations in California and Florida. While I really want this hat, I would also love the one pictured above. It is Jeff Bridge’s prop hat from the original “Tron.” In 2008, the Walt Disney Company Archives had an exhibit called “Hats off to Disney” that was displayed on the Walt Disney Studios lot in Burbank. Lots of drool had to be wiped off the glass, of course. End of line.