Wildlife Wednesdays: Gerenuk and Giraffe ‘Stick Their Necks Out’

Two species of animals that “stick their necks out” to get to leaves that are too high to be reached by other animals are the gerenuk and the giraffe. While they don’t quite go “neck and neck” (the giraffe is a lot taller) in getting to the shoots, buds, flowers and fruits from trees and shrubs that make up their diet, they both are well adapted to their “neck of the woods.” 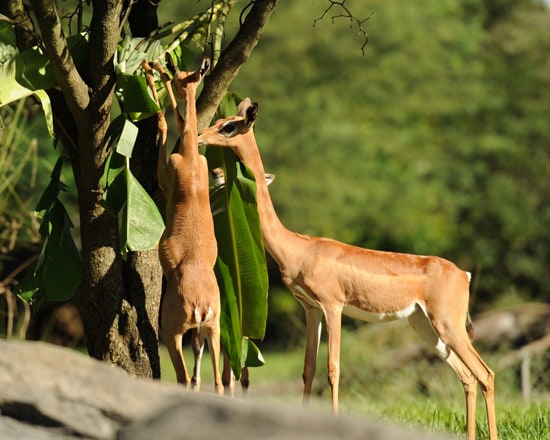 Well, enough of my feeble attempts at word play! Here are some gerenuk and giraffe fun facts.

In the wild, the biggest threat to gerenuk and giraffe is habitat loss; the study and protection of the world’s wildlife and ecosystems is the focus of the Disney Worldwide Conservation Fund. Disney’s Animal Kingdom has breeding programs for both gerenuk and giraffe in accordance with Association of Zoos and Aquariums Population Management Plans.