One President’s Day at Disneyland Park 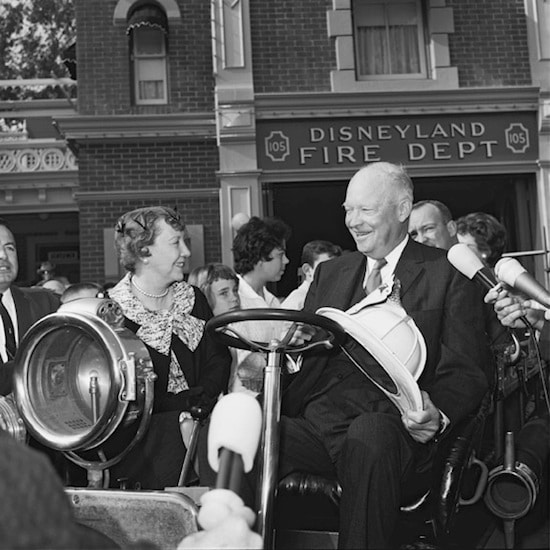 This is a fairly well-known photograph of former President and Mrs. Dwight D. Eisenhower which was taken at Disneyland park in 1961 during a visit with their grandchildren. Being one of only five former U.S. presidents to visit us so far, it’s to be expected that a photograph of this kind would become familiar over time. So what would the chances be that, nearly 45 years later, we would discover more pictures from this memorable day in our history?

In preparation for our 50th anniversary celebration in 2005, I uncovered a photo negative from this visit that I had never seen before. No one I shared it with had seen it either. It is similar to the black and white photo I had seen for years, only this one was in color.

Here is that rarely seen photo of Ike and Mamie meeting the press outside the Disneyland Fire Dept. Every time I see “Engine No. 1” in the park, I think of President Eisenhower and this photo. Another photo we discovered around the same time was one that has likely never been released, as the former president appears slightly blurry in it, but I thought this seemed like a good time to share it. Taken at the Main Street Station of the Disneyland Railroad, this photo also features his granddaughter Mary Jean and grandson, David; the namesake of the presidential retreat, Camp David. 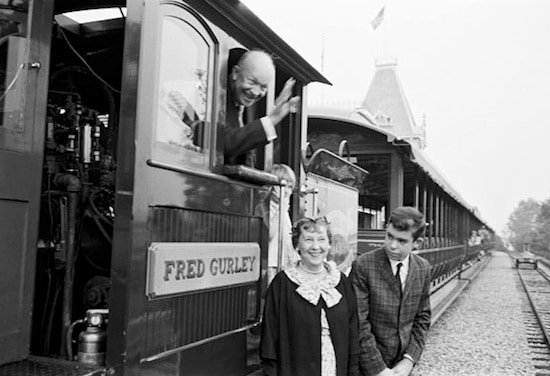 President Eisenhower was an admirer of Walt Disney and once described him as someone “who has spread more understanding of the fun-loving American than anyone else and has brought joy to the hearts of many people, both young and old.”

He also saluted Walt for his “contribution to the pleasure and understanding of the world community and your genius as a creator of folklore has long-been recognized by leaders in every field of human endeavor including that most discerning body of critics, the children of this land and all lands. As an artist, your work has helped reveal our country to the world, and the world to all of us. As a man, your sympathetic attitude toward life has helped our children develop a clean and cheerful view of humanity, with all its frailties and possibilities for good.”