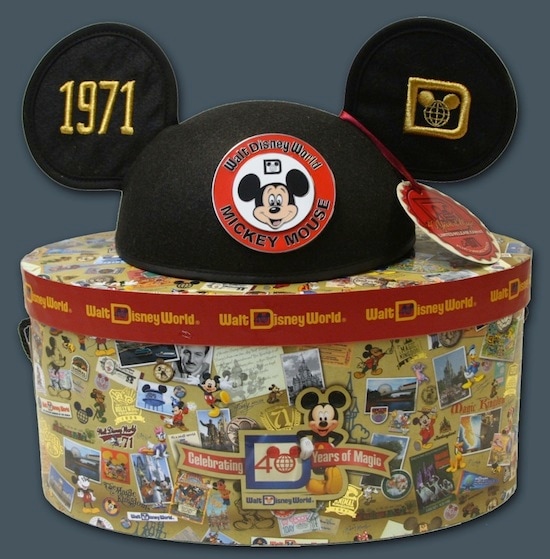 I love looking at maps. I could spend hours tracing roads and planning imaginary trips to destinations unknown. A favorite souvenir of mine from a 1988 family trip to Florida was a stylized cartoon map of Walt Disney World. I hung it on my bedroom wall to help me stay connected between Disney trips. One of my all time favorite vintage Walt Disney World maps is from the 1970s. Drawn in a cartoon style, the map featured an overview of the Magic Kingdom area (complete with resorts never built). So what does this have to do with 40th Anniversary ear hats? Imagine my delight when I discovered that 1970s map printed on the underside of the 40th anniversary limited release ear hat. I spoke with Mark Seppala, Disney Design Group Artist for headwear, about the map’s inclusion. “The map seemed like a perfect fit for this anniversary hat,” explained Mark. “It was added to the underside of the hat via a sublimated printing process. I particularly like how the map shows the once proposed Mediterranean Hotel.”

Mark began work on the hat in Spring 2010. Following a trend of other collectible hats, it comes packaged in a deluxe, satin lined hat box. The outside of the hat box uses the previously discussed 40th Anniversary collage designed by Natalie Kennedy. There are a few extra surprises besides the map that Mark added to this collectible hat.

“The original idea was to have an embroidered logo on the front of the hat,” continued Mark. “I asked Megan [product developer for headwear] if I could make a cloisonné logo instead. She loved the idea!” 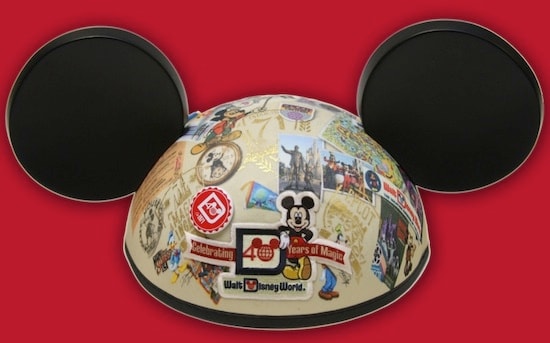 Mark is no stranger to working in cloisonné. He spent several years designing cloisonné Disney pins during the early days of Disney Pin Trading at Disney Parks. Mark also shared there are three unique fabric patches that come packaged with the limited release hat.

If you are looking for a more simplistic way to commemorate the 40th Anniversary via your head, there is an open edition hat that is just as festive. 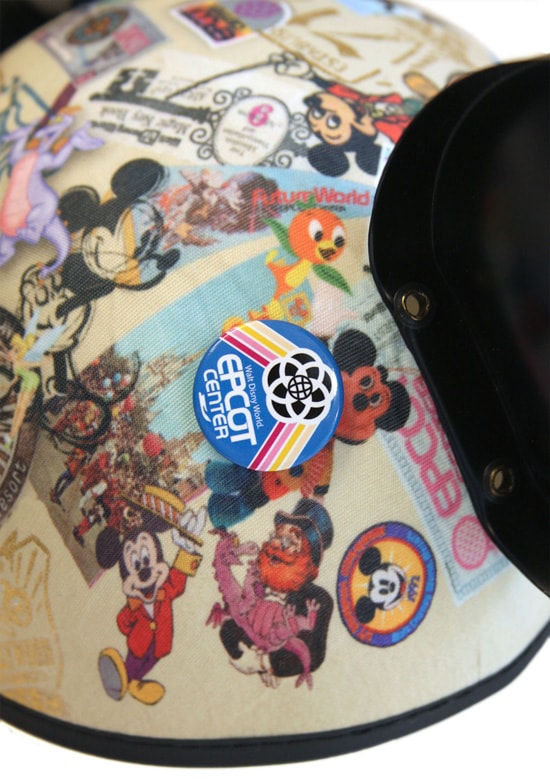 This open edition hat also has some three-dimensional features including a patch and two mini-buttons. My favorite detail is the “trifecta of awesomeness” (see above) – the Orange Bird, an Epcot Center button and Dreamfinder with Figment in a row!

I asked Mark about his first visit to the Walt Disney World Resort.

“I first visited Walt Disney World in 1973 with my Mom,” said Mark. “I had finished serving in the Navy and came to Florida on vacation. The thing I remember the most was looking down Main Street, U.S.A., and seeing Cinderella Castle. I couldn’t believe how big the Castle was!”

These hats are available in a variety of merchandise locations throughout the Walt Disney World Resort.