This October, the Walt Disney World Resort celebrates its 40th anniversary. Wow – 40 years! It seems I have spent the majority of my life either visiting Walt Disney World as a guest or making magic as a Disney Cast Member. As discussed in a previous article, I enjoy collecting Disneyana from the vacation kingdom of the world. So imagine how beyond excited I was when asked by Natalie Kennedy, Senior Graphic Designer with Disney Design Group, if she could use some of my memorabilia for a 40th anniversary collage she was creating (yes, total Disney geek moment!). I recently spoke with Natalie about her work, which is now prominently featured on some 40th anniversary merchandise.

“The first step was finding memorabilia to use for the collage,” said Natalie. “Once gathered, I imaged each item for placement into the big picture. I wanted elements from all four parks and images of Walt Disney included in the collage. From start to finish, it took me about three months to create the image.”

I first saw the collage in Summer 2010, and I still catch new details every time I see it. The “40th Collage” program is one of several art programs we will introduce for this anniversary year. The recent SHAG artwork is another example of a program created especially for the 40th anniversary (there are a few others, so please stay tuned). 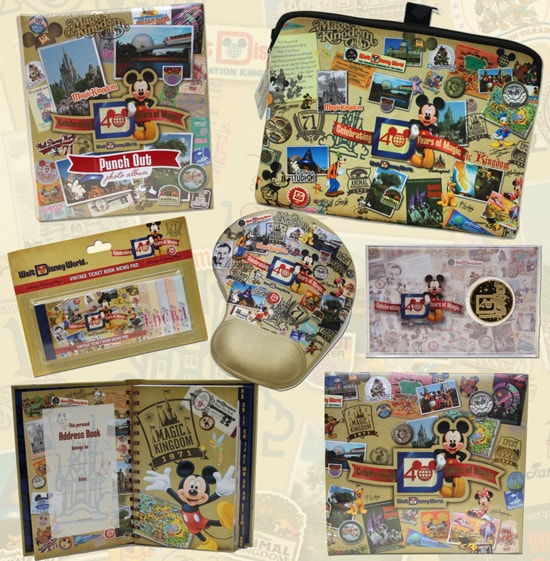 This collage is part of a global program, meaning that you will find it used on a variety of items. Natalie purposely designed it for usage in multiple categories.

“I support the lifestyle hardlines teams which include categories like stationery, seasonal, consumables or home and decorative,” continued Natalie. “From the start, I was challenged to make the collage usable for other categories outside lifestyle hardlines. From what we’ve seen so far, guests love this image!”

I asked Natalie about her first visit to the Walt Disney World Resort.

“I first visited [the Walt Disney World Resort] in 1973,” explained Natalie. “My parents participated in the Beautiful-A-Bug contest which was held in June of that year. I can still remember driving down I-4 with my parents in our car wrapped in aluminum foil. My parents chose a spaceship theme for the contest. I included the ‘Tips on Your Visit’ brochure in the collage for my father. We got it during that first family trip and I still have it today.”

I was thrilled to see that Natalie included my EPCOT Center bag, button and classic guide map from 1982 (which I used in another Disney Parks Blog article). Natalie shared one final detail she has heard many people have loved finding.

“I’ve heard several guests remark how they love seeing the Orange Bird in the collage,” laughed Natalie. Right on – who doesn’t love the Orange Bird?!