All Aboard for the Grand Canyon Diorama on the Disneyland Railroad

With more than 55 years of history at the Disneyland Resort, it’s fun to look back now and then at special dates that have influenced the magical storytelling that happens here every day. Tomorrow, March 31, is the anniversary of the 1958 grand opening of the Grand Canyon Diorama on what was then called the Santa Fe & Disneyland Railroad.

When you ride the Disneyland Railroad between the Tomorrowland Train Station and Main Street, U.S.A., you’ll travel through a tunnel with two distinct dioramas. Today, we’re celebrating the anniversary of the first of those scenes to appear in Disneyland park.

Going from the bright, natural light of the park inside the tunnel plunges you into darkness, and that gives way to the enthralling vista of the Grand Canyon Diorama. Depicted from its south rim, the canyon is revealed on a canvas that is 306 feet long and 34 feet high, making this backdrop one of the world’s longest dioramas. Another remarkable aspect of this canvas: it’s seamless and handwoven. 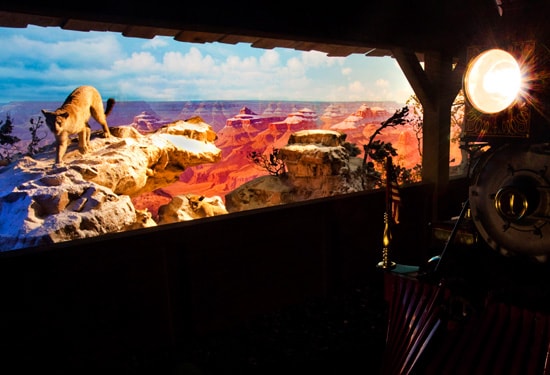 This replica of the Grand Canyon required 300 gallons of paint to capture its natural marvels, including a snowfall, a storm, a sunset and a rainbow. The scene is based upon Walt Disney’s Academy Award-winning live-action short subject of 1958, “Grand Canyon.”

As passengers are pulled slowly past this famous American landmark, flora and fauna native to the landscape appear in realistic detail. The canyon ridges are filled with all kinds of critters, including deer, mountain lions, skunks and wild turkeys. The mood is set by the click-clack of train wheels, accentuated by music from the “On The Trail” section of American composer Ferde Grofe’s Grand Canyon Suite.

I’ve seen this diorama several times while riding the Disneyland Railroad, and each time I’m impressed with the natural wonder of the Grand Canyon. This photograph made me wonder what Walt Disney might have imagined when he was directing the project. Walt visited many spectacular places around the world and many of his “mental photographs” later became a part of Disneyland park – almost like a 3D scrapbook of his memories. I’m glad he decided to share these special marvels with all of us.