More Than Meets the Eye at Disney’s Hollywood Studios One of the things I’ve discovered in my near infrared photo travels through the parks at Walt Disney World is that I really love the drama of direct sunlight in this style of photography. I tried shooting a few things one morning when it was overcast and found the results flat and lifeless. This was partly because of the lack of contrast in the scene and partly because the shots didn’t have the dramatic, near-black tones that come from a nice, blue sky.

Shooting down Hollywood Boulevard toward the Sorcerer Mickey Icon was kind of a no-brainer, though I was surprised at how the 122-foot tall hat almost looks like part of a miniature set. Some of that may be due to the fact that the photo was shot about 30 seconds before the park opened and the streets were still eerily empty. 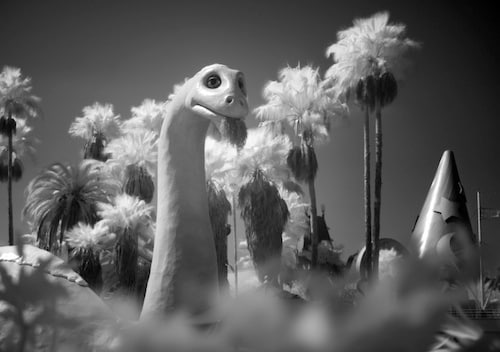 After I had that angle covered off, however, I found myself walking in ever-widening circles around the icon to find another point of view, and that’s when I saw Gertie, who looms above Gertie’s Ice Cream of Extinction on Echo Lake (I didn’t know the lake had a name). Gertie was the main character in Winsor McCay’s 1914 silent film, “Gertie the Dinosaur,” which was originally created to be used as part of his vaudeville routine.

Okay, that’s it for today. I’m off to get some ice cream.