The other day I was chatting with fellow blogger, Steven Miller, while we were flipping through a few Disney heritage books in the office. Disney history buffs, ourselves, we both gravitated towards the books that featured Walt Disney, the Nine Old Men, and the classic art of hand drawn animation. As we flipped through the books, it was amazing to see how far Disney Parks has come and how much has changed since Walt first arrived on the scene in 1923. It was Walt’s dream to entertain the world through a variety of mediums, which continues to be evident today as we continue to pay tribute to the heritage and tradition that started so many years ago.

Looking through the books led me to think about a few of my favorite films and how they were brought to life. It’s overwhelming to think about how much effort and dedication went into creating each animated classic. It took a committed team of artists to sketch the characters, ink and painted each cel by hand, and color the backgrounds for each and every scene. While there have been many changes and advancements in technology that have changed the way we create our animated classics, the beautiful tradition of hand-inked and hand-painted cels is still very much alive at Walt Disney World with the Disney Studios Ink & Paint Team at Disney’s Hollywood Studios. A few months back, I introduced you to the Disney Studios Ink & Paint Team and a gave you a behind the scenes look into what goes into creating each and every cel in the Ink & Paint Collection. 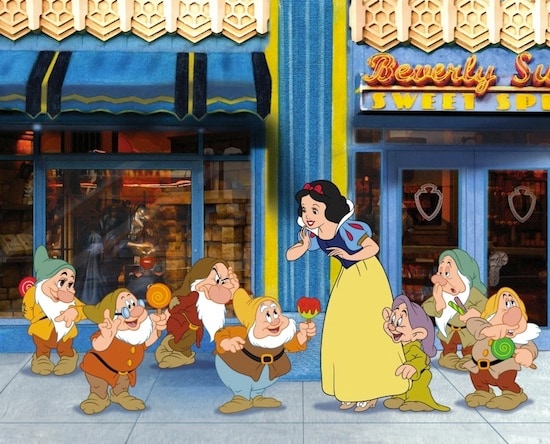 The Disney Studios Ink & Paint Team is small, but mighty. With six animators working behind the scenes, they paint each and every cel in the Ink & Paint Collection by hand. It’s the job of the Ink & Paint Team to bring each character to life to tell the story about the world our characters live in on the cel. The Disney Studios Ink & Paint Team is currently in the process of celebrating the release of the 45th release in the Ink & Paint Collection, titled “Look What I Got!” The new hand painted cel depicts Snow White and the Seven Dwarfs as they enjoy confectionery creations from Sweet Spells on Sunset Boulevard in Disney’s Hollywood Studios. Both Snow White & Dopey are hand painted onto the cel.

Fun Facts: Did you know that each cel takes approximately 1.5 hours to create? Also, the “Look What I Got!,” cel will feature the most colors ever used on a cel from the Disney Studios Ink & Paint Team, topping out at 18 different colors.

On Saturday, March 12, you can celebrate the release of this new cel and help us pay tribute to those who made the magic possible and those who carry on the tradition of hand drawn animation today with a special signing at Disney Hollywood Studios, from 10am – 1pm and 2pm – 5pm. For more details on the cel, how to order this special piece, and to learn more about the artists that will be appearing for this special signing, please visit www.ArtofDisneyParks.com.