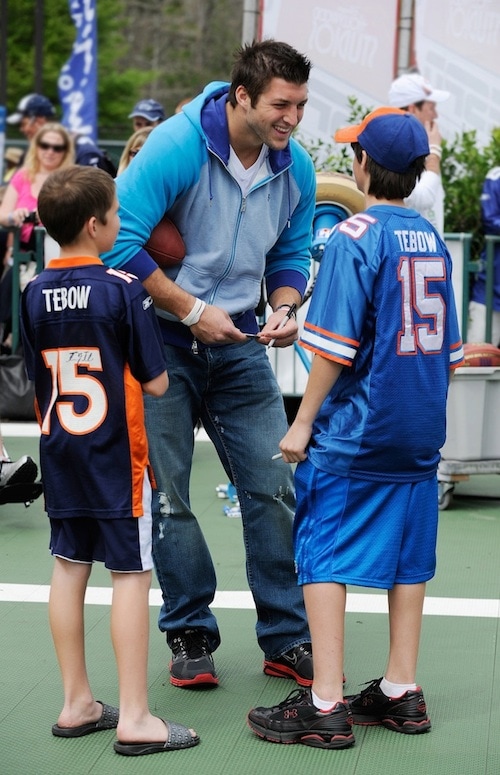 Packers, Gators and Ducks, Oh My!

Today, ESPN The Weekend was in full swing at Disney’s Hollywood Studios theme park as sports fans of all ages rubbed shoulders with their favorite sports heroes and ESPN personalities.

As ESPN TV and radio broadcasts took place throughout the park, sports stars were shining bright in motorcades, star conversations, game shows and more. Some of the sports stars were spotted enjoying some of the park’s attractions during breaks in the ESPN The Weekend action. (After all, they are at Walt Disney World, right?)

The NFL was well-represented on Friday, with an All-Pro assembly of current and legendary athletes on hand to meet and greet fans. And it wasn’t odd to see a group of kids playing an impromptu game of touch football with current gridiron stars like Larry Fitzgerald, Chad Ochocinco, Jason Witten, Greg Jennings and Darrelle Revis, or shooting hoops with NFL Hall of Famers like Tony Dorsett and Darrell Green. And while the competition was not fierce, I expect these kids will remember this day for a very long time.

A big fan favorite on Friday was Tim Tebow (seen in the photo above), former Florida Gators quarterback who just completed his rookie season for the NFL’s Denver Broncos. In addition to winning the Heisman Trophy at the University of Florida, Tebow also was the recipient of the 2008 Disney Sports Spirit Award — a one-of-a-kind award created by representatives of Disney Sports and ESPN to honor college football’s most inspirational player. As the action continued on the football field, other sports also shared the spotlight in the ESPN Interactive Sports Zone. All-Pro cornerback Darrelle Revis picked up a fishing pole and tried his luck at angling for some big bass lunkers, while the University of Oregon and Tampa Bay Buccaneers mascots danced and entertained fans throughout the Zone.

ESPN The Weekend continues through Sunday, so come on out, get in the game and join in the fun.