One of my Disney Legend heroes is Blaine Gibson, the acclaimed sculptor responsible for creating untold numbers of pirates, presidents and other magical Disney figures. Beginning as a Disney Studios animator in 1939, and working on many classic Disney films, Blaine had a passion for sculpting that he carried from childhood, and after finishing with his “day job,” he would take sculpting lessons at night.

In 1954, Walt tapped Blaine as one of the very first Imagineers who would put so many faces on the Walt Disney Company over the years. Two of Blaine’s most recent works were delivered long after he retired in 1983, with the “Partners” statue depicting Walt and Mickey standing together first created for Disneyland Resort in 1993, then Walt Disney World in 1995. In 1999, at the age of 81, Blaine delivered “Sharing the Magic” to Walt Disney World. 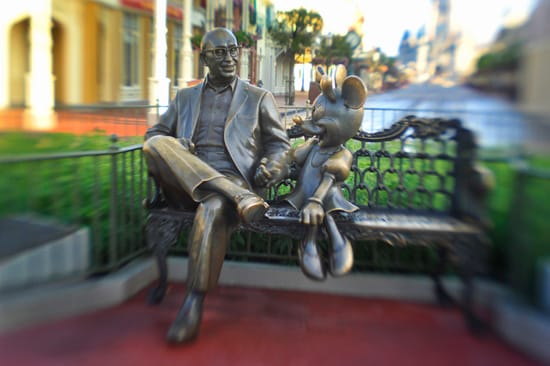 The iconic park bench occupied by co-founding father Roy O. Disney seated next to Minnie Mouse greets millions of guests each year and is one of the most prized photo locations ever. Although it was originally placed inside the fence in Town Square at Magic Kingdom Park, guests routinely climbed over it to sit next to Minnie. Within a year, it was relocated just outside the fence. Guests may feel that the empty space to the right of Minnie was made for them, but Blaine’s intent was to show Minnie’s conscious decision to sit right next to Roy as a way to make him more “approachable,” as he was rarely in the limelight as was Walt.

Blaine also purposefully had Roy support Minnie’s hand from underneath, a creative acknowledgment of how Roy supported his brother in their new business venture. Amazing…I hope the next few photos reveal a bit of the magic that Blaine so masterfully created from the heart.