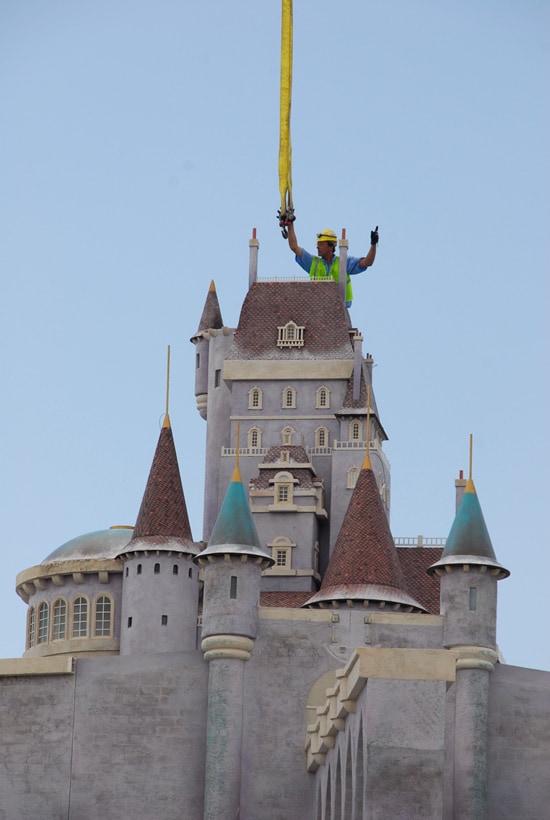 This week, we shared exclusive photos of the progress Walt Disney Imagineers have made on Beast’s castle at Magic Kingdom Park. It’ll sit on top of what will become the Be Our Guest Restaurant. The “Beauty and the Beast”-inspired restaurant, which is set to open in late 2012, will offer a lavish dining experience in the castle’s elegant ballroom, gallery and mysterious “west-wing.”

Be sure and check the Disney Parks Blog this week for a video tour of the area from Walt Disney Imagineering.

And this was a treat – a front row seat in a session with well-known musical arranger and orchestrator Danny Troob and a 65-piece orchestra, as they recreated the amazing Little Mermaid music we all know and love.

Now, check out some of the other stories we worked on this week:

Things That Spin in the Night – A Different Perspective at Disneyland Park – Disneyland Resort photographer Paul Hiffmeyer takes one last “spin” at Disneyland park, revisiting the Astro Orbitor to share a unique perspective.

Backstage Tours Offer Insider’s Look at Disney Parks – Take a sneak-peek at what you can expect to see on a backstage tour at Walt Disney World Resort.

Galactic Offerings Await You at The Star Trader at Disneyland Resort – We share a quick look at the galaxy of new Star Tours and Star Wars inspired-apparel, toys and more coming to Disneyland Resort next month.