When NASA astronaut Lt. Col. Virgil Ivan “Gus” Grissom carried the first memento into space when he took a roll of dimes with him on his Mercury flight in July 1961, he started a tradition at NASA that carries on 50 years later. 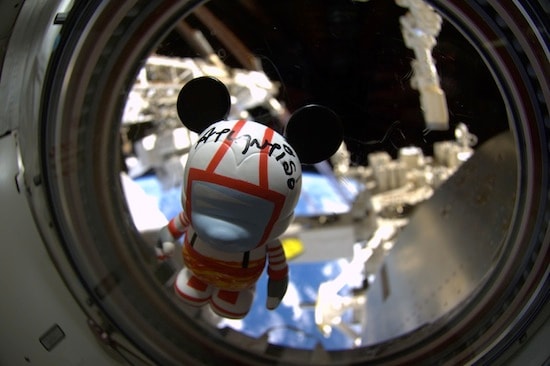 To celebrate and inspire exploration, NASA astronauts have carried items into space that they have a unique interest in – items that are then brought back to Earth and placed on display in hopes of inspiring future explorers and achievements.

Disney Parks was honored to be part of STS-132 in May 2010, aboard Space Shuttle Atlantis on its mission to the International Space Station (ISS). STS-132 Commander Ken Ham requested that two very special (and quite small) “guests” join the six-person crew on Atlantis’ 32nd flight – two 3-inch-tall Vinylmation figures.

Commander Ham and his wife, Michelle, are avid athletes and runners who have participated in several endurance races in the “runDisney” series. And with its proximity to Cape Canaveral, Walt Disney World has been a vacation stop several times for the couple between missions.

(And here’s another fun fact: Commander Ham served as the Pilot of STS-124, the 2008 mission of Space Shuttle Discovery that had another Disney Parks “special guest” aboard – a 12-inch-tall Buzz Lightyear toy. Buzz, who always dreamed of going to “infinity and beyond,” spent more than 15 months aboard the ISS before returning to Earth and being feted with his very own ticker-tape parade in Magic Kingdom Park. Joining Andy’s famed space ranger in the gala parade was legendary astronaut Buzz Aldrin.)

Two Vinylmations were aboard Atlantis – the Mission: SPACE-inspired figure from Park Series #3, and a “Create-Your-Own” blank figure that we invited the astronauts to decorate. Prior to the flight, the Mission: SPACE figure was customized by a Disney artist to honor STS-132 and the astronauts. The astronauts then added their own artwork to the “Create-Your-Own.” When the pair came back, we began making plans for their display in the special V.I.V. (“Very Important Vinylmation”) Case at D-Street at Downtown Disney West Side here at Walt Disney World.

On your next visit, we invite you to stop by and take a look. They definitely are record-holders as the Vinylmation figures who have travelled the farthest distance from Walt Disney World!

We’re honored to have these Vinylmations on display for everyone to view. We hope they inspire the same achievement, creativity and exploration that NASA intended when Lt. Col. Grissom carried the very first mementoes into space as he piloted Liberty Bell 7 nearly 50 years ago.