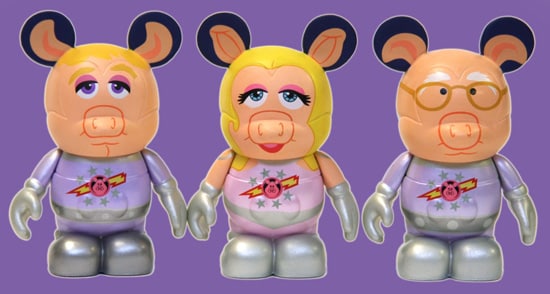 As a child, one of my favorite segments from The Muppet Show was “Pigs in Space” (followed by “Veterinarian’s Hospital” and the “Muppet News Flash”). I can’t get the announcer’s voice out of my head – “Piiiiigs in Spaaaace!” So, I was super thrilled to see Link Hogthrob, Dr. Julius Strangepork and Miss Piggy come to life as new Vinylmation figures in the second Muppets series. It was more than a year ago when I first spoke with Monty Maldovan, the Disney Design Group Artist responsible for the Muppets Vinylmation figures. I caught up with Monty to learn about what we can expect from the new series arriving at the D-Street locations in California and Florida on April 15, 2011.

“I had so many ideas that spilled over from series one into series two,“ explained Monty. “The biggest difference from the first series is the use of accessories. I actually redesigned several figures to include them.” 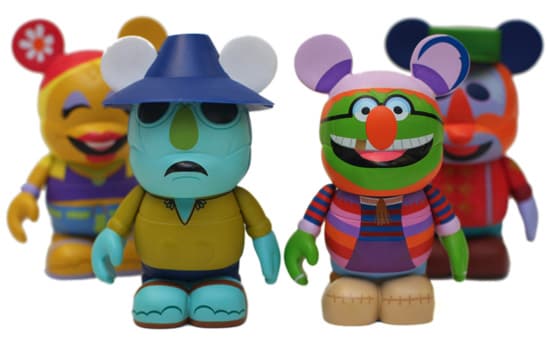 Zoot the saxophone player is one of the figures with an accessory (his hat is removable). I always liked that character probably because I once played the sax. Monty’s favorite character from the series is Dr. Teeth (he still has a fondness for Kermit the Frog though – who doesn’t?).

“Dr. Teeth is very colorful,” laughed Monty. “After seeing the first concept, Thomas Scott, one of the lead artists for Vinylmation, had me reduce the number of colors I selected to help with the manufacturing process. Despite the reduction, he may be the most colorful three-inch figure ever!” The other big difference in series two is the addition of nine-inch figures. Three words – Sam the Eagle! The nine-inch figures will be released at a future date (not April 15); they include Animal (with drumstick), Gonzo and his chicken Camilla (awesome!) and Kermit the Frog sporting 3-D glasses.

“The Kermit with 3-D glasses design was originally planned to be the 3-inch mystery chaser figure for the first Muppets series,” said Donald Ferro, developer for Vinylmation. “We saved the artwork for series two after we changed the mystery chaser to tuxedo-clad Kermit to celebrate his 55th Anniversary.” Monty told me that nine-inch figures were once considered for the first series.

“Rizzo the Rat and Gonzo with Camilla were originally planned to be nine-inch figures for Muppets series one,” explained Monty. “Rizzo became part of a Park series and we saved Gonzo until now.”

Fans in California will have the opportunity to meet Monty on Friday, April 15, at D-Street at Downtown Disney District in California. He will be signing figures from 2 p.m. to 5 p.m. that afternoon. For fans in Florida, we are also holding an event on April 15 (sans Monty as we haven’t cloned him…yet. Calling Muppet Labs!). Guests can meet Disney artists Maria Clapsis, Casey Jones, Doug Strayer and Eric Caszatt from 10 a.m. to Noon at D-Street located at the Downtown Disney West Side in Florida.

I hope you have enjoyed this 500-word salute to all things Vinylmation, but mostly the Muppets. I now return you to your regularly scheduled Disney Parks Blog updates.