We told you a while back about the exciting, new parade coming to Disneyland park this summer, “Mickey’s Soundsational Parade.” Imagine Mickey Mouse leading his friends down Main Street, U.S.A., with live musicians, nine colorful floats and an extravaganza of Disney tunes. It will be music in motion, starting May 27.

You were so thrilled to see the first artist’s rendering of the parade that we decided to share a few images up close. These were revealed today in a presentation given by Disneyland Resort President George A. Kalogridis. 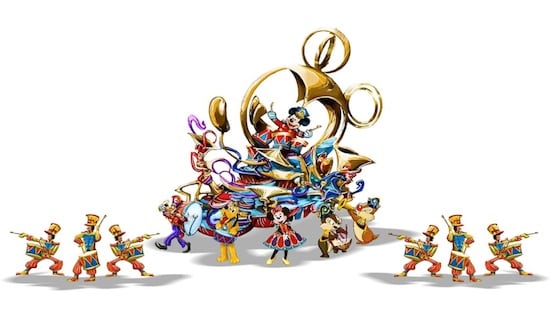 Blog readers really liked the concept of this giant jam session when we first announced it. Here’s what some of them said:

Alexander: “This is great! I really like the Mickey float! I noticed … the princess float has a tall tower. Would this be from ‘Tangled’?”

Yes, you will see elements from “Tangled” along with Disney princesses.

June: “I can’t wait to see this! …I love the idea of live music and steel drums.”

Brendan: “I think my daughters will be most excited to see the Princess and the Frog float … I’m looking forward to music during that section.”

We are, too Brendan. New Orleans jazz and Cajun rhythms will come rollin’ down the bayou, from the Disney film, “The Princess and the Frog.” Here’s a closer look at that float and one of the vibrant costumes that will be worn by the dancers.