I was recently speaking with Sylvie Brumbaugh, product developer for World Showcase, about the Royal Wedding of Prince William and Kate Middleton (I’m sure I’m not the only one discussing this topic). Clearly, the wedding has captured the attention of the world. Sylvie told me that the United Kingdom Pavilion at Epcot has a limited selection of merchandise celebrating the special day. So, I set out with camera and paper in hand to survey various offerings.

First up, I found a very popular replica of the engagement ring that Kate Middleton is wearing. The ring has a retail of $24.95. I spoke with Kaz Stotesbury, an International Program cast member from Petts Wood, England, about her interest in the wedding. She was kind enough to pose for the photo above (and I didn’t have to get down on one knee; sadly I’m not a Prince).

“I met Prince William when I was younger,” explained Kaz. “He visited my school and it was great to meet him. Before working at Disney, I worked in London. I’ve seen the excitement that the Royal Family brings to the city.” The Royal Family merchandise is located in the Tea Caddy Shop in the United Kingdom Pavilion. We are offering a T-shirt, ornament, perfume and a few additional items. Sylvie told me that the response has been overwhelming. Sylvie also shared with me a special teddy bear that is being introduced at the United Kingdom Pavilion. The William the Commemorative Royal Wedding teddy bear was designed by The Great British Teddy Bear Company. The bear is dressed in a Royal “Bear Force” uniform and includes a giant replica of the engagement ring. The bear has a retail of $89.95, and the United Kingdom Pavilion will have a limited number of them for sale. 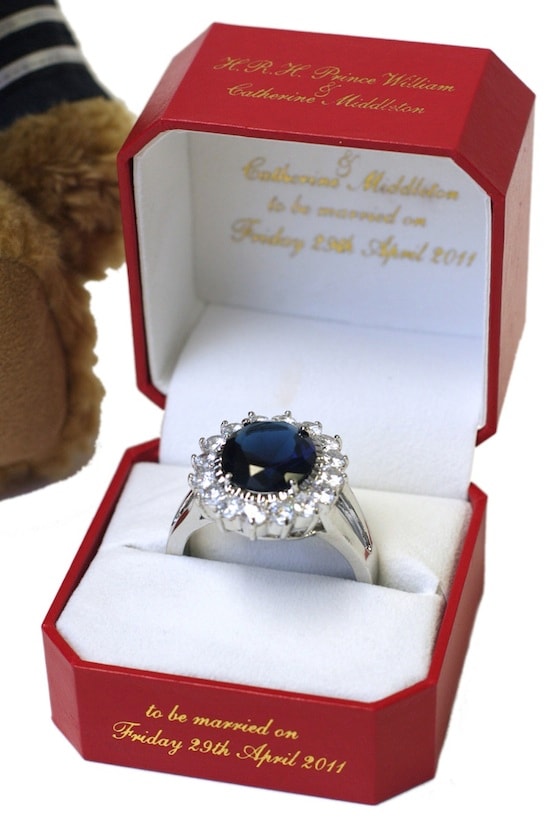 While standing in the location, I spoke with several guests from the United States and Great Britain about the wedding. Many were anxious to tell me their story of how they planned to celebrate the day. Before leaving, I met Ben Pomeroy, another International Program cast member from hails from London. I asked what the Royal Wedding meant to him.

“The Royal Wedding has grown on me,” said Ben. “I believe that Prince William and Kate’s marriage is one of true love. I’ve enjoyed speaking with many guests from all over the world about the wedding, and sharing a part of my culture with them.”

Best wishes to Prince William and Kate Middleton on their special day!