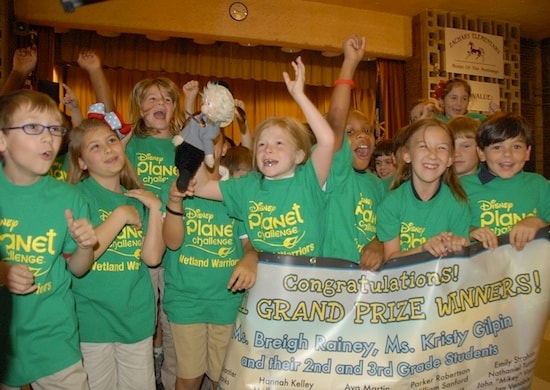 Those second and third graders can’t contain their excitement because they just won the national elementary grand prize in Disney’s Planet Challenge environmental and science competition. They also just found out they’re going to Disneyland and will be the stars of a parade down Main Street, U.S.A. on May 6.

The students from Zachary Elementary School in Louisiana beat out thousands of kids across the United States for their work towards saving the Louisiana coastline and wetlands ecosystem.

With the help of their teachers, Ms. Breigh Rainey and Ms. Kristy Gilpin, the second and third graders built a school nursery, grew hundreds of grass plants and replanted them along the coastal beach area of Grand Isle. The winning students wrote and published books about the Louisiana Wetlands in an effort to educate the community and are donating the money raised from the sale of the books to wetland preservation. The Zachary students also secured a deal with local radio stations to broadcast their Coastal Roots podcast to help spread the word about their conservation efforts.

Here’s a look at how excited the kids were when they learned they won at their school assembly on Friday, April 1.

Disney’s Planet Challenge is the in-school program for Disney’s Friends for Change, an initiative that focuses on inspiring kids and families around the world to take simple steps to help the planet and their communities.

Disney’s Planet Challenge winners were chosen by a judging committee comprised of scientists, environmental experts and educators including representatives from the National Science Teachers Association (NSTA) and WestEd K-12 Alliance

If you’re a teacher or parent and want to get your kids involved, Disney’s Planet Challenge enrollment for the 2011-2012 school year is open now at https://disney.go.com/planetchallenge.