Last night, we made history at The Walt Disney Company when we officially broke ground on the Shanghai Disney Resort and we couldn’t be more excited. Did you see the new castle art? Today, we’re continuing the celebration with a first look at the groundbreaking ceremony that was authentically Disney and distinctly Chinese – just as the park promises to be. 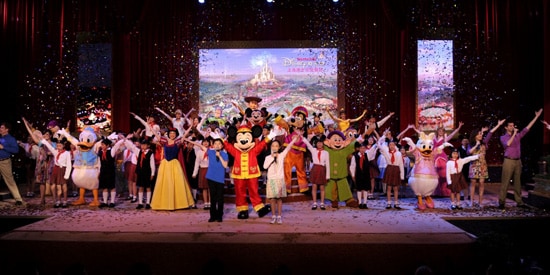 After the entertainment, President and CEO of The Walt Disney Company Bob Iger and Chairman of Walt Disney Parks and Resorts Tom Staggs were joined by Shanghai Party Secretary Yu Zhengsheng and Shanghai Mayor Han Zheng to officially break ground on the project.

The resort will include a Magic Kingdom-style park called Shanghai Disneyland, two themed hotels, a large dining and entertainment venue, recreational facilities and more. There will be all-new attractions and experiences tailored specifically for the people of China at the park. And yes, expect to see several themed lands with iconic Disney attractions.

The new Shanghai Disney Resort is slated to open in approximately five years. Check back here on the Disney Parks Blog for more updates in upcoming months.