Hi everyone. Today, I have a special story to share with you about wishes.

Some of Disney’s biggest heroes possess a special tool which they use to make magic. For Cinderella’s Fairy Godmother, it was her magic wand. For Aladdin, it was his magical genie lamp. And for Epcot cast member Huyen Kibo Bui, it’s a tiny origami crane. 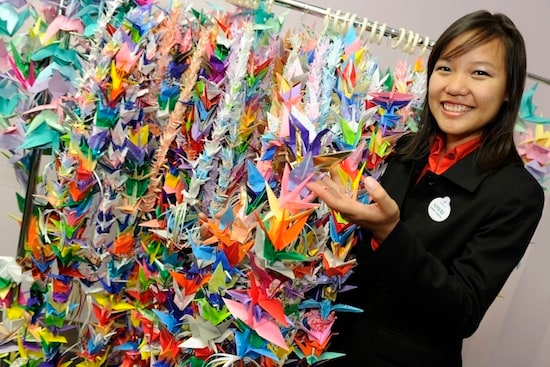 Huyen, originally from Ho Chi Minh, Vietnam, was devastated when the recent earthquake hit Japan. Wanting to find a way that she and other Epcot cast members could send a special message of hope back to this ravaged country, Huyen turned to a Japanese belief that the recipient of 1,000 folded origami cranes receives one wish. With her goal in sight, Huyen began folding. 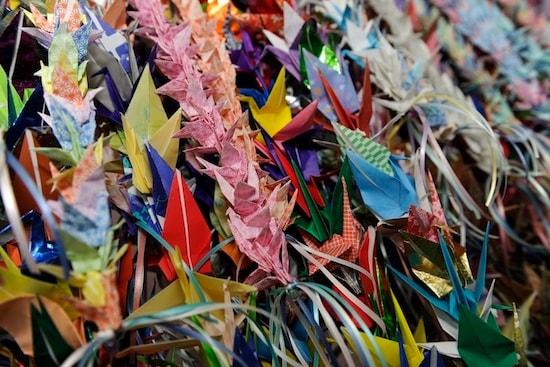 And so did her fellow Merchandise cast members. And when the pavilion’s shop, Mitsukoshi, donated origami paper to the project, word quickly spread through the rest of Epcot. Cast members from all over the park began folding cranes during their lunch breaks. Others took cranes home to fold, relying on extra help from their family members. 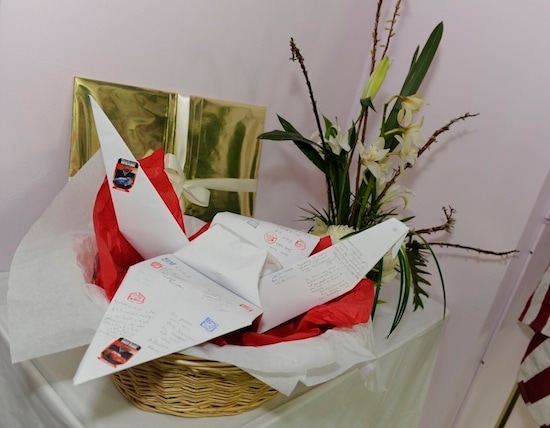 Touched by the support of her fellow cast, Huyen created an oversized crane, named “Kibo” (the Japanese word for “wish”), which made its way around World Showcase for guests at other international pavilions to sign.

Suddenly there were more cranes than anyone ever expected – a stash of nearly 3,000.

Earlier today, an overjoyed Huyen, accompanied by Epcot Vice President Dan Cockerell and other park leaders, presented a total of 2,760 of these winged “wishes” for hope and recovery to Hayato Nakamura, Consulate General of Japan.

Perhaps it’s fitting that today’s presentation coincided with Children’s Day, a national holiday in Japan that celebrates all the beautiful things that children bring into our lives – especially hope for the future.