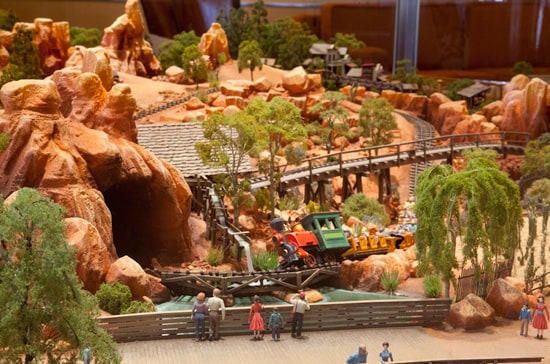 As part of the ongoing updates at the Disneyland Hotel, Walt Disney Imagineering brought a special piece of Disney history to the lobby of the newly refurbished Frontier tower. A replica of the original model used in the design of Big Thunder Mountain Railroad has been installed in the lobby to be viewed and enjoyed by guests.

Of the nine plaster copies that were made of the original model, one of the few remaining copies was used by Imagineers to create the model seen in the Disneyland Hotel – so this one-quarter scale model is an exact copy of the original.

As the plaque accompanying the model reads, “This is a recreation of the original ‘Concept Model’ for Big Thunder Mountain Railroad at Disneyland, created by the talented artists of Walt Disney Imagineering. Imagineers use scale models such as this as a tool as they define and refine designs for projects.”

Guests can now view the Big Thunder Mountain Railroad model in the lobby of the Frontier tower of the Disneyland Hotel.

Take a look at more updates at the Disneyland Hotel: